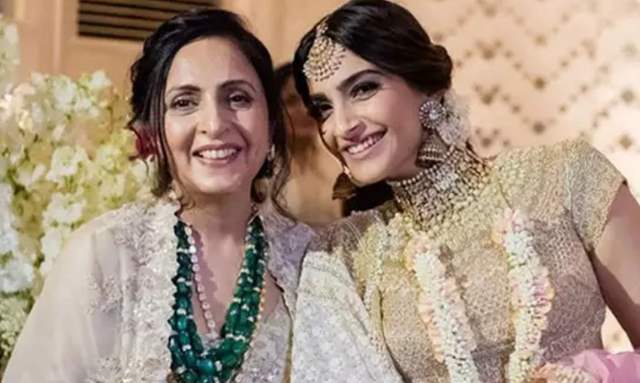 Sonam Kapoor Ahuja and tied the knot with longtime boyfriend Anand Ahuja in a fairytale wedding in 2018. The couple exchanged vows in a traditional Anand Karaj ceremony and later hosted a grand reception for their Bollywood friends and family.

Having completed two years of married life, Sonam and Anand shell out major couple goals with their PDA. Apart from Anand, the actress also shares a dear bond with her mother in law Priya Ahuja.

A few months ago, Sonam and Anand had returned from London to New Delhi, where Anand’s family resides. The actress spent the lockdown period with her husband’s family and bonded well with her mom-in-law as well. In a recent chat, she opened up about her routine with her mother in law and talked about the activities the duo did together to spend their time.

Speaking to Filmfare, Sonam revealed that her mom-in-law loves dressing up and the actress herself is a fashionista so they dressed up together and also enjoyed baking together. She also lauded her mom-in-law as ‘cool and progressive.’

Sonam said, “So my mom-in-law is one of the most progressive and cool women you will ever come across. She dresses beautifully. Both of us were like during quarantine, we are not going to dress up in pajamas and work out clothes. We love baking together. She and I love dressing up. I haven't stayed up in gym clothes and pajamas for more than 2 to 3 days. It takes a little extra effort to dress up, but I wouldn't mind spending 2-3 hours to dress up.”

Currently, Sonam is back to Mumbai and staying with her parents Anil Kapoor and Sunita Kapoor, along with sister Rhea Kapoor and brother Harshvardhan Kapoor.

Recently, Sonam turned off her comments section on Instagram owing to the hate-spewing after Sushant Singh Rajput’s death. “Hey guys I usually don't shy away from hate and negativity because I feel sorry for the people who have so much hate in their hearts as it harms them more than me.

But it's triggering my friends and family. I understand that they are paid bots and people who are pushing a conservative right-wing agenda. But right now is the time to speak about the lives lost at the borders and the lives affected by the lockdown. I'm turning off my comments” she wrote in a post

‘Ready For A Baby’, Sonam Has The Most Savage Reply to Friend’s ...

Sonam Pens Down a Heartwarming Story Revealing Cute things about her ...

'We Always Wished for a Daughter and then You Came': Sonam's Saasu Maa ...

exclusive
Exclusive Mohit Malhotra talks about reuniting with Hina Khan, if ...
46 minutes ago