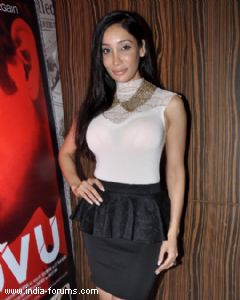 The complaint was filed here on Wednesday, reportedly due to Armaan's violent behaviour towards Sofia on the show.

"Sofia has filed a complaint against Armaan Kohli at Santa Cruz police station. She will be holding a press conference to discuss further plans," Sofia's manager said on Thursday.

The actress was satisfied after successfully filing the complaint.

"Santa Cruz police have been very professional and courteous," she posted on Twitter.

Sofia was evicted from 'Bigg Boss Saath 7' last week. During her stay on the show, an argument broke out between her and Armaan. Armaan ended up hitting Sofia with a mop and that left her hurt.

Armaan has been in the spotlight for his temper on more occasions than one, and he has been seen indulging in fights with other inmates as well.

-Preeti- 9 years ago I would say either Dilip Kumar or Rajneekant or Aamir Khan .... One of these deserve to be there

rest look fine, SRK's is the best. the statue's posture represents him well.

zara_11 9 years ago SRK's statue looks like he's old. Salman's is the best as is AMITABH'S- I THINK.

Pyari_Zahra 9 years ago I went there and honestly, Salman's statue was the best- Aishwarya's was a disappointment, didn't look an inch like her!! x

Yuvika_15 9 years ago i feel amir khan, madhuri and actors like dilip kumar should hav made it there b4 sum1 like hrithik did