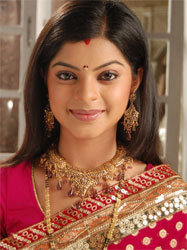 Tellybuzz had recently reported about the makers of Rang Badalti Odhani, Beyond Dreams Productions, bringing a new venture for Star Plus for which Sudhanshu Pandey is being considered to play one of the vital roles.

The latest buzz we hear is about Sneha Wagh who played the lead role in Imagine TV's Jyoti has apparently been zeroed in to essay the female lead in the show.

As the show will have Punjabi backdrop, the production is planning to go for an outdoor shoot to the North but for time being the pilot of the show is ready.

We tried contacting Sneha Wagh but she was unavailable for her comment.

So here's some happy news for Sneha Wagh's fans who are waiting to see her back on screen...

k.krithika 8 years ago All the best Yash ji :)
Thanks a lot for giving us our RBO Please comeback with RBO Season 2 missing the entire RBO team very badly :(

AnuPurva 8 years ago wow thats nice.. Sneha and Sudhanshu will be interesting pair..

manjha 8 years ago how many more shows are we going to get on SP? what are they gonna axe now? All SP shows are actually doing good and better than many channels.. please spare shows like Navya, IPKKND and EHMMBH which actaully have a good storyline!

AK4HC 8 years ago It should be on IMAGINE!!!!!!!! theres too many new shows coming on star plus... anyways... where has balaji been these days? I WANT TO SEE MORE BALAJI SHOWS, I MISS THEM SOO MUCH! theres hardly any now :(

croziaxx 8 years ago IF it is true ? then it is fantastic news.
sneha is very-very fine actress, very impressive, she talks to her eyes .i just hope that the show will also fine and her comeback will be great..

uaassshi 8 years ago Loved u Shenha as Jyoti & will definetely try to watch u in a new serial dat to in a Punjabi style...

Looking forward to see u soon also in one of my fav yash of RBO...

captkirk 8 years ago did great work in Jyoti! really liked her in that show!

supportkt 8 years ago she is an awsome actor.way to go girl...all d best yash ji

R.A.J 8 years ago Nice to see her back. Shez talented n deserves it