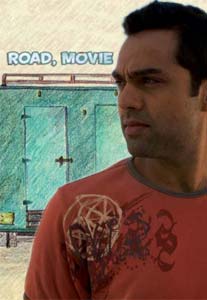 
An old truck beckons, which Vishnu sees as his ticket to freedom.  He offers to drive the antique Chevy across the desert to the sea, where it has been sold to a local museum.  As he sets off across the harsh terrain of desert India, he discovers he's not merely transporting a battered vehicle but an old touring cinema.


Along the way, Vishnu reluctantly picks up a young runaway (Mohammed Faizal Usmani), a wandering old entertainer (Satish Kaushik) and a striking gypsy woman (Tannishtha Chatterjee - Brick Lane).  Together they roam the barren land, searching for water and an elusive fair.  The journey turns dire when they are waylaid by corrupt cops and a notorious waterlord.

The key to their freedom is the eccentric collection of films and the two forty-year-old film projectors in the back of the truck.  As in 1001 Nights, if the films are good, they live and move on.  If the films are boring, they face death in the outback.


The journey proves transformative for each of the travelers, but especially for Vishnu who discovers life, love and laughter on the Indian highway.


Produced by the US-based Ross Katz and Susan B. Landau, and presented by The Indian Film Company and Studio 18, the script of the Dev Benegal-directed feature was an official selection at L'Atelier du Cannes in 2006. Road, Movie (in Hindi) is India's first breakthrough feature at TIFF'09 - an official selection that will have a world premiere at The Winter Garden Theatre on September 18.
Featured Video