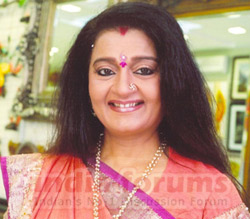 Apara Mehta is petrified of snakes. But such is the story of "Saat Phere" that reptiles are common on the sets. All was well till the slithery creatures were kept away from Apara. But when a particular scene required her to share screen space with them, Apara simply refused to shoot. After much coaxing, she agreed on the condition that the snakes didn't come near her. Yet, at the eleventh hour her fear took over and she fled the site. The producers had no option but to cancel the shoot.

Apara calls herself a veteran in the industry and likes experimenting with roles. Then does such immature behavior suit her stature? The actress needs to toughen up if she really wishes to set an example.

15 years ago veteran or no veteran..i wud run from the site of a snake...lol...
and its common that this slimy things come on the set...omg im just horrified reading it

+ 2
15 years ago depends on what the actress is comfortable with. it's not that she's immature

+ 3
15 years ago Good article/pictures.
Enjoyed it.

+ 2
15 years ago whoever said she needs to toughen up is stupid. fearing things like snakes is real....it's a psychological thing. some fear snakes so much that they break down while even looking at a picture. this fear has nothing to do with being a professional, veteran or age. Whoever said that toughen up crap needs to think before they be rude.