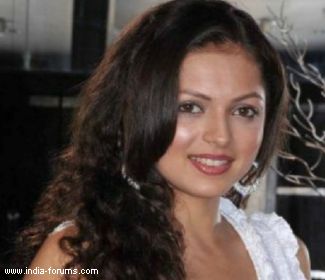 She is set to portray a Bollywood diva on the small screen, but Drashti Dhami, the lead actress of forthcoming show "Madhubala... Ek Ishq, Ek Junoon", says she has no immediate plans to enter the film industry and wants to take each day as it comes.

In the new show, to be aired on Colors, Drashti will essay the role of Madhubala, "a simple, mature and calm girl, who doesn't wish for stardom, but it is forced on to her."

But what is stardom for DrashtiIJ

"What I wish for and what I have got," the 27-year-old said confidently.

As of now, the actress, who is so far popular as Geet of "Geet Hui Sabse Parayi", is looking forward to her new show.

"It's going to be a challenge. For two years I have been playing Geet. I have taken a break and now I am refreshed to get into a new character," she said, dispersing all rumours that the show is based on the life of real life Bollywood stunner Madhubala.

"The show is really not about Madhubala. One has to realise that it's not a three-hour movie. It's a TV show, and that cannot last on just one character."

"'Madhubala' is just a tribute to the film fraternity, to people from the industry - actors, junior artists, co-ordinators, the families who deal with them... it is an attempt to show how they are in real life and the emotions that they go through. It's about what happens behind-the-scenes, not about one person," clarified Drashti.

But personally, Drashti is a fan of late actress Madhubala, who ruled the Hindi film industry in the 1950s and 1960S with her grace and charm.

"I think she was a diva, an epitome of beauty. I don't think I can ever be remotely compared with her. I don't think there's anyone as beautiful as her in the industry. If and when people see the show, they will realise, it's not about her, so there shouldn't be any comparisons," she said.

"Madhubala", the show produced by Saurabh Tewari's Nautanki Films, features Vivian D'Sena as the male lead, a superstar named RK. The show will go on air May 28.

Video: Shraddha Kapoor asked about marriage plans, her reaction is ...

7 years ago seeing you back on top after so
long. Love u Drashti Dhami :*))

+ 3
7 years ago I love Drashti and respect her all decisions... Whatever she do is definately a best and i always support her...
Drashti you rock small screen dear..

dantella 8 years ago Im crazy about Geet
There is not any other actress can compete her
OMG, how much I like her dancing

8 years ago i love you DD u are d best, cuteat, loveliest n d most beautiful n talented actress

8 years ago Drashti i really really love you as madhubala...keep rocking love you,and you are the best...

u r the best and we all know that, i have no clue why ur rank is in number three now a days even though we all know who is suppose to be in the first rank!!!!

but who cares abt IF ranking , we always loved u and we will, no matter what IF Rank they give u

may you always touch success in whatever you do