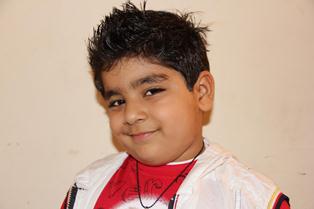 Child actor Sadhil Kapoor who has won millions of hearts through his portrayal of the mischievous Bal Ganesha on Life OK, will soon be seen as 'Captian Tiao' on a talk show on Disney Channel.

The eight year old kid who has been a part of numerous television shows and commercials will now interview famous personalities in his cute and innocent way on the show.

According to sources, Sadhil's interest in the show was heightened by the show's unique concept of asking numerous questions to satisfy one's curiosity, which he could relate to as a kid who is also full of queries all the time.

+ 6
10 years ago hahahaha
this is Funnny ...anyways good observation

10 years ago Neither - this dress looks like its from a sci-fi movie or from star wars!

10 years ago the dress looks like something out of star wars or star trek. Lol. They should both be charged by the fashion police for wearing such an ugly dress.

+ 2
10 years ago The dress is ugly, but you cannot compare the pics because one is a photoshoot pic and the other is candid.

10 years ago I personally don't like the dress, full stop. But I'd say they've both pulled it off quite well.