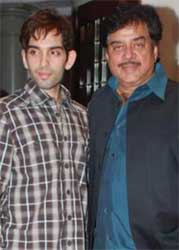 Bollywood's veterans are eager to launch their children into Bollywood and the latest to join the long queue is Shatrughan Sinha! His son, Luv Sinha, is all set to hit the big screen in April.


Working with legends such as Rekha, Hema Malini and Rishi Kapoor, Luv will be seen in Raj Kanwar's sometimes romantic, sometimes emotional Saadiyan - a cross-border story set in the 70's.


The movie has already garnered much interest and has become widely anticipated despite it's delay due to several strikes.  Whilst father Shatrugan Sinha is a wee bit anxious about the debut, son Luv is confident that even if the film does not do well, he couldn't have found a better debut platform than this.


In related news, Shatrugan Sinha's daughter who has studied fashion and design, is channeling her talent towards costume design for mother Poonam's home productions. Additionally, Sonakshi will also be seen to debut against the macho Salman Khan in Debangg.


Luv's twin, Kush Sinha, who assisted director Sanjay Leela Bhansali during Saawariya has decided to follow the path to becoming an actor.  Both brothers are currently on the hunt for a script that will feature them together in front of the camera.
4 Likes

19 Shows & Films To Look Out For Streaming in October on ...
2 minutes ago