A perfect picture of a true brave officer who shows exemplary courage in fighting his enemies on the battlefront, the actor talks about his role in the show 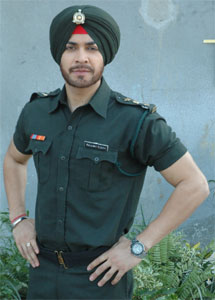 Tell us something about your character, Kulwant Singh?
He is a brave army officer, but very emotional at heart when it comes to his family. Kulwant has different positive shades in life. This is what I like about the show as it not only portrays professional life, but also the personal side of it. Most of the people think that army officers are very rude and not emotional, but that's not true.

It's been said that you have performed your own stunts.
Yes, I insisted on doing that. I feel when the audience watches the stunts in the show they should be convinced by the actor. There were lots of safety measures taken and I enjoyed performing the stunts. Though I hurt myself with sprains and cuts on my hands and legs, I'm satisfied as I have not cheated my audience by using a body double.

What kind of preparation have you done for your role?
My role is of an army man and I have worked hard on my body language and dialogue delivery. I  read books on army officers and met few of them to know more about their experience. I have also worked on my body to give it a definite shape.

What do you have to say about your get up in the show?
I feel so good and proud to wear the army dress and turban. Frankly, I feel like a king and a true army man.

Tell us something about your background?
I'm basically from Delhi, but have been living in Bombay for the past eight years, and am in this field since four years. I started my career in the modeling world, but could not sustain over there and joined theater. Then I got a call for Har Ghar Kuchh Kehta Hai, Ghar Ek Sapna and finally landed as the lead in Meet Mila De Rabba.

Why did you leave modeling?
I don't think I was meant for that world. They ask you for things that you just can't give. That made me a bit uncomfortable, and decided to leave it. I agree that it happens everywhere, and you are forced to do things you don't want to, but in the fashion world it's just too much. Though I still get offers, I do it only if I feel it's good and comfortable.

'Lion King' Prequel in The Works With Barry Jenkins

kaayak 11 years ago he is doing a good job in meet mila de i watch meet mila de only for piyush... he is good...

wackysharu 11 years ago he looks good.... the show also is intresting... lets see how it takes shape...

pc84 11 years ago i liked the show and with his entrance the show have taken a very exciting turn! can''t wait to see more of him!

AreYaar 11 years ago Oh wow....a Sikh army officer as the main hero in a show?? Interesting....definitely something new to see.

Badtameez_Dil 11 years ago loved the look of his. new style statement given 2 the industry.

SamLuvsSaRun 11 years ago Thanks.Luv the show n lookin forward to the lead pair:)