The buzz of Sindoora aka Kamya Punjabi coming back to Dulhann has been heard since long. We bring you the latest update on this as we talk to Kamya Punjabi. 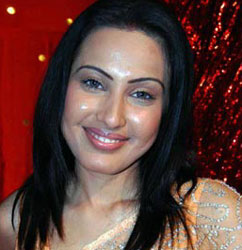 Featured Video
“Talks are still going on, but nothing is fixed as yet. They want to bring me back as the TRP’s are dipping,” says Kamya.

So, what was the reason for your exit then? “Dulhann is my show and when the creatives decided to kill me, I said that is the best for the show and when I enter back, it will also be good. I know that if I come back it will be for the betterment of the show,” she adds.

Sindoora has been receiving weird comments from the loving audience of the show. “I was shocked to see that there are people who don’t want me to come back in the show. They hate me but I really don’t know why. The day when everything becomes fine with Amar and Vidya, the show will end as there will be no further track to excite audiences”, argues the actress.

“I want to convey the message that my character is as important as the two leads, for the show to go on. And off screen I, Sharad and Divyanka share a good rapport with each other. We are real good friends,” she verbalizes.

We called up Shyamashis Bhattacharya, Producer, Shakuntalam Telefilms who confirmed the comeback of Sindoora to the show. “She will be coming back, but not immediately. Currently we are focusing on the major twist and its repercussions. So watch out now, as the story line is getting back to its best phase”, quips the Producer.

Well, let us see if Sindoora’s comeback can bring back some spice to the show…

13 years ago WooW the three of them are gud friends! Didn''t know that! But yeah they are kind of the same group age!!

Cheers! Sindoora is coming back!

+ 3
13 years ago Umm, Dulhann''s TRPs aren''t dipping because Sindoora isn''t there... they''re dipping because the storyline isn''t going well right now. Not with Gauri and whatnot... the TRPs rise when the lead couple in the show are together and actually have some scenes together, since the main antagonist is not there. I won''t be looking forward to Sindoora at the moment because I''m still waiting for AD... but let''s see. Thanks for the article!

13 years ago I think that the creatives deliberately created a horrible track for the very purpose of directing/manipulating? the audience to the opinion that Sindoora is necessary to the success of the show by favourable comparison to the present thread . I personally love to watch Kamya Punjabi''s acting as Sindoora, but I would have preferred that they had explored other good options and used her re-entry to take the show to a higher high, instead of devaluing the viewers'' worth, and Kamya''s as Sindura by deliberately (in my opinion it seemed very deliberate) downgrading the show once she left to make the audience feel punished for their wanting a break from Sindoora''s triumphs and a new storyline with a strong united AD/SV. Just how I feel, no offence intended to anyone.

13 years ago i actually want her to come bak, shes a great actress n i was hooked on to the show when she was in dulhan....now, dulhan is boring w/o her =(

13 years ago i knew that once amar & divya are together happily, then the show ends there. all i ask for is someee moments of AD together. with this gauri track ... AD were barely together and amar was rushed off to some business trip .. and then this gauri bs started.
kamya''s reentry will be exciting. lol scary & exciting. cause this time, she''ll be back for bharat. >.<

+ 4
13 years ago omg i dont want her to come back...we ve already too much of her..but agree with others that she is better than gauri
really hope the creatives do something new instead of bringing her back

+ 5
13 years ago YAY! I actualyl want her back! BETTER THAN GAURI! and she adds a flare to the show! Its nice..YAY!