Just when viewers breathed a sigh of relief with Rano (Rachana Parulkar) going back to her estranged husband, without marrying Prem (Harshad Chopra) in Star Plus' Kis Desh Mein Hai Meraa Dil, the news is that yet another girl will slowly make her way into Prem's life!! 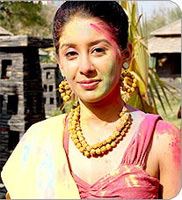 Featured Video
According to our source, "The new entrant to Kis Desh is rookie actress Simran Khanna who was last seen in Star One's Shakuntala, where she essayed the role of Shakuntala's close friend, Priyamvada".

We talked to Simran who has started shooting for the show. "I play the parallel lead in the show opposite Prem. I happen to be Jasmeet aunty's daughter who has come from abroad. She is also Heer's best friend. Geet will eventually fall in love with Prem, but I can't disclose what happens next (smiles). But my role is a long running one".

According to our source, "This development of Geet falling for Prem will give rise to certain interesting turn of events which will please the audience".

Simran who was seen in Shakuntala has also done a DD show, and was also part of few episodics of Ssshhh. .. Phir Koi Hai..

+ 3
13 years ago @aada...i dont kno wat kind of freak u r.......all i kno is ur brain is crap...cuz u dont kno the difference between gud or bad shows......seriously have u even watched the show properly....i feel like beatin everyone's ass who r alwayz bashing shows that they havent seen properly...if u dont like harshad then simply dont watch the show or view this article..but stop spreading negativity..ohhhh wait wait.....u even viewing the article is a negativity by itself!!

13 years ago ohh yaar this geet is getting on to my nerves now..

+ 4
13 years ago it wont be long till the bestfriend turns into a vamp!!

konii 13 years ago HAVE U ALL CHECK OUT THE LATEST DISCUSSION ON (SBS) FACEBOOK............WHATS HAPPENING THEIR

anija.jacob 13 years ago hey
the story is getting more &more interesting
but we r not able to see it
DIE SP DIE..........

This girl is trouble for sure!!!!!