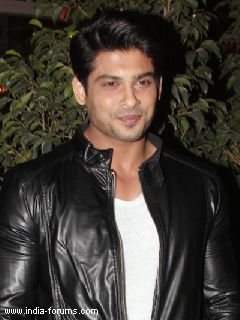 Handsome hunk Siddharth Shukla seen as Shiv in Colors show Balika Vadhu has made his way into Bollywood with Dharma Productions' film Humpty Sharma Ki Dulhaniya where he will be seeing sharing the screen space with Bollywood actors Varun Dhawan and Alia Bhatt.

He got this big opportunity to work with Karan Johar because of Jhalak Dikhla Jaa: Dancing with the Stars and he is back on the same platform to cheer up all the contestants as well as to promote his film.

TellyBuzz contacted Siddhart to know his feelings on coming back on the stage from where he got his ticket to Bollywood.

Siddharth is elated about making his appearance on the dance reality show Jhalak again as he says, "It's very wonderful to be back on the platform from where I got a chance to accomplish my dream of becoming a Bollywood actor. Humpty Sharma Ki Dulhaniya is my debut film which I got because of Jhalak so it's a pleasure to be back on the same stage sharing the stage with the ultimate judges who welcomed me warmly and supported me and wished for my success with film. I was overwhelmed with the love and support I received from all the crew and judges in Jhalak, which is very supporting and encouraging."

So who is Siddharth supporting in this season? He says, "I didn't see any of the performances as I had come just for less time so I really can't judge but all the contestants are good dancers so surely this time the level will be much higher and I wish all of them good luck."

Siddharth performed some dance moves on the stage to reminisce his experience of dancing. He performed with Drashti Dhami who is the host of the show. Well as per the rumors we asked about his link up with Drashti to which he replies, "It's all baseless. She is like a friend to me and I have performed with others too on the same stage."

It will be interesting to see Siddharth in Jhalak again!

NatalyMusketeer 5 years ago Siddharth shukla, it would be just great to see you in JDJ again...

Justnandi 6 years ago Siddharth Shukla always want to see you in other projects along with balika vadhu.

Anjujag 6 years ago How was it going back to jhalak ? Siddharth Shukla & all the best Siddharth Shukla for ur film