During a game played in the camp, Shweta Tiwari was asked to narrate the toughest decision of her life! 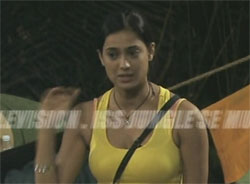 Featured Video
Shweta said it was the divorce with husband Raja but she wouldn't want to talk about it in the open. She instead spoke about a disgusting incident with co-artists Deepak Qazir (the actor who played Anurag Basu / Cezaane Khan's father in Kasauti) & Cezzane Khan.

It was during the days of her show Kasauti Zindagi Ki with Balaji Telefilms when they had back to back, day and night shoots to complete the episodes.  Needless to say it was a rough time for her… as her daughter who was in Meerut with her in laws (Raja Chaudhary's parents) had fallen severely sick. So Shweta had put in a special request to get some time off her hectic schedule to go look after her ailing daughter.

That's when co-artists Deepak Qazir and Cezanne Khan played dirty and spread the rumor within the production team that Shweta was lying about her daughter's illness and the real reason for her break was that she was to attend a Navratri function and was getting paid 1 lakh for it. Shweta denied this then and was convincing the crew that it was for real and no excuse but what disgusted her much more later was when Deepak told her "Give me Rs 50,000 from your 1 lakh that you will get for the show and then I will tell the producer that your daughter is really unwell and needs your attention".

By then Shweta lost her cool and got in touch with Producer Shobha Kapoor who granted her just one day leave. When she reached Meerut and met her daughter Palak, she was really happy and requested her not to leave. But since she had to be back in time for shoot, Shweta left in the wee hours of the morning when her daughter was fast asleep to resume work the same day. She said that it was one of the toughest decisions where she had to prove herself right.

Shweta cannot forget  the incident so much so that on national television she broke down saying:" I will never forgive you for this Deepak Qazir"...

+ 2
13 years ago Don't bring cezanne into all this. Deepak must have invloved him. By the way no one forgot what you did to cezanne. Posting false info just hating him for nothing.

Don't bring cezanne into this. If he is too hot and hansome for you to handle then please stay away from him. He never even talks with you.

13 years ago really? they did that? that's actually ver disgusting

+ 2
13 years ago Thats a pathetic dirty game played by DQ and CK and it involves a sickl daughter...well looks can be decieving and they certainly proved it that they are notso nice as they show on screen...

+ 2
13 years ago im a huge fan of shweta & cezzane.according to me they were da best on screen couple ekta has ever made...still i wud love to see dem together as they luk so electrifyng together...but i always kno cezz is very different in off screen..actually dts his true colour...but deepak i never thought he was like dt...ewww..wat a cheap man...started hating him soo much..poor shweta..

13 years ago OMG thats so mean and disgusting..poor Shweta..I believe her....but i do want to know what DQ and CK have to say abt this

+ 6
13 years ago she says that she spoke to Cezaane and Deepak abt her Divorce .. and acc to one of the magzine's at that time(During KZK) she claimed that she never had any issue's with her husband ever before

am confused ... anyways all the best to her

13 years ago this may just be a ploy to get sympathy votes . i dont think deepak qazir wud stoop so low for a paltry sum like 50,000

13 years ago We dont know what happened and this could also be a stunt for getting sympathy votes!!!! And watching todays episode and blaming Palak not helping with task proves it!

+ 5
13 years ago What goes around comes around! His time will come eventually!