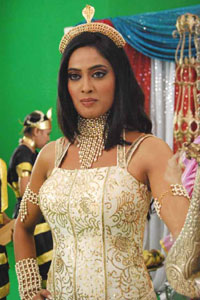 Kasauti Zindagi Kay may have come to an end, but it does not indicate the end of Shweta Tiwari’s television career. The effervescent actress will now be seen performing in a dance face-off with Shayantani Ghosh in Zee TV's Naginn.

Shweta Tiwari plays the role of queen Surmaya of Trikund Lok. Her character is very haughty and arrogant who puts up a dance competition with Shayantani Ghosh, who plays Amrita in the show.

Speaking to the Telly Buzz team about the upcoming episode, Shayantani says, “This dance competition episode is a one week-end episode. Shweta plays the role of an evil queen and I need to get a fruit to gain my powers, which is in her garden, but she refuses to give it to me. When I tell her that I am an Ichadaari naginn she challenges me to a dance competition.” She further adds, “Ultimately I win the competition and Shweta gives me both the fruit and her kingdom, but I refuse to accept her kingdom. All I tell her to mend her ways and be more kind-hearted to her people.”

“It was an awesome experience working with Shweta Tiwari”, says an exuberant Shayantani.

Well it sure will be a great experience and treat for the viewers to watch the two ladies give each other a good competition.

+ 4
14 years ago Very odd that Akshay Kumar is missing from the list..when he acted very well in all the four movies this yr...Nammaste London, Hey Baby....Bhool Bhuliya...and most recent Welcome....

+ 5
14 years ago Shweta is really beautiful and a wonderful actress as well. Good to see her in Naagin. I hope she signs a new show soon.

14 years ago she luks so beautiful , sweet n cute i lvoe her alot...all the best

thanks for the info