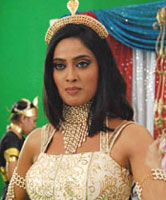 The talented Shweta Tiwari is high on demand, as the actress who is now doing COLORS' Jaane Kya Baat Hui, after being roped in to host Sony's Jhalak Dikhhla Jaa Season 3 is now getting back to Zee's Naaginn.

Shweta earlier played the role of the arrogant Queen Surmaya of Trikund Lok who loses a dance competition to Amrita aka Shayantani Ghosh.

"But now, Surmaya is brought back by Triveni (Aroona Irani) to kill Amrita", informs our source.

Confirming this news is Shweta Tiwari, "Yes, I am getting back to the show after one year. I had earlier lost the dance competition to Amrita, but now I am back to take revenge. And Triveni brings me to kill Amrita".

"My character will be a cameo which will not last long", concludes the actress.

Well, the New Year is really turning out to be great for Shweta!!

10 years ago Shweta Tiwari is da BEST!!!
U looked very beautiful as the Queen!
Shweta U ROCK!!!
LOVE U!!

+ 2
13 years ago yaar she is back ,see what happen in the show after she come

deecees 13 years ago Queen Surmaya has actually forgiven amrita after the dance competition and now the revenge part....confusing