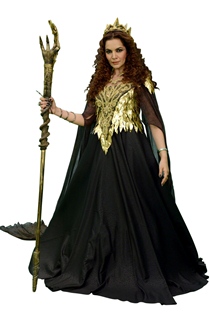 Baal Veer is a prominent fantasy TV series on SAB TV, the concept of the show is to entertain kids and take them into magical trips to fairyland. The talented  actress Shweta Kawatra was seen portraying the character of Bhayankar Pari in the show Baal Veer.

From quite a long time Shweta was missing from the show Baal Veer and versatile Shweta Tiwari entered the show to fill the emptiness in the show. She was seen essaying the role of Mahabhasma Pari who uses her evil powers to destroy Parilok, the place where all the fairies reside.

Now Shweta Kawatra is back in the show from a vacation and will soon start the shooting for Baal Veer.

TellyBuzz contacted Shweta Kawatra for her re-entry in the show and she says, "Yes, I will be seen back again on the show. I was on a mini vacation with my family for some time. Meanwhile my character was missing in the show. As I am back in the show I will be acting with Shweta Tiwari who is also portraying a character of an evil Pari in the show."

It will be interesting to see Shweta Tiwari and Shweta Kawatra sharing screen space together in the show Baal Veer.

Faraan92 6 years ago Haha.. will be good to see both Shweta's interacting with each other in da same show :P this is da 1st time they both r working with each other.. thanks 4 da info TB :) Shweta tiwari simply rock as Maha bhasm pari :P she is awwesome in negative role too.. Budtameez 9 years ago Now that Amar Singh is in jail, who is Bipisha going to have late night sexy innuendo chat and texts with?

mihali7 9 years ago tht's wat they all say 'the next one will be for keeps' buh a relationship tht was strong for 7-8 year can't be forgotten and hard to find again in months. John n Bips knew each other so well and were committed buh John had issues to commit, I mean wat more are you looking for Bips had beauty, brains and definitely more success than him. It really really sucks bcuz they were THE couple hope they both find good mates.
P.S Bips shud go back to Dino lol they luk too cute together plus after he broke up wit Lara he said 'the next one will be for keeps' :P