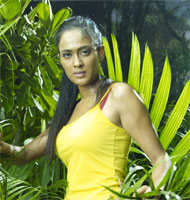 Shweta Tiwari who has always been considered affable, is now seen in a grumpy avatar in Sony's Iss Jungle Se Mujhe Bachao. Seems like the Malaysian jungle lifestyle is not at all suiting Shweta Tiwari, who has earned the nickname desh ki bahu (courtesy Palak).

Says our source, "Shweta is being a total delicate darling. She is not at all adjusting to the circumstances, and is found cribbing all the time!! And when she was offered radish and peppers she complained about the absence of salt in her food. She started murmuring that even after making the contestants do all the difficult tasks, not even a pinch of salt is being offered to them."

Seems like Shweta is attracting a lot of negative vibes from her fellow contestants even without any fault of hers. Says the source, "Aman Verma's favoritism for Shweta is definitely not being taken in a good way by the co-contestants. Even though their closeness is not a threat to the contestants' strengths, it is definitely something that they envy. But the sad part is that the brunt of this is being borne by Shweta and not Aman."

Will Shweta give in to the physical as well as mental stress? Or will she survive it all?

To know catch Iss Jungle Se Mujhe Bachao from Monday to Thursday at 10.00 pm & Fridays at 9.00 pm only on Sony Entertainment Television.

+ 4
13 years ago Palak and Fiza need to calm down, they have no right to talk about someone like that.

13 years ago palak nay kya bola ST k baray may...nd dis fiza is such an irritating character....such a dominating tone i guess she has some inferiority compkex...she shud b out 1st nd den palak will b alone..i like aakash,mona and ST..but is may itna mazaa nahi aa raha ..

13 years ago Ugghh..Palak is so annoying=\ But what's wrong if Shweta complained abt salt?? Thats something necessary!!

13 years ago i like Sheweta's acting she's such a nice actress .

+ 2
13 years ago I have not seen the first episode. Can anyone tell me if the contestants are allowed to create their own food sources like fruits etc? Also I agree to most that Palak is again picking her Roadies avtaar and here she has another big drama queen with her in the name of Fiza. Sooner they leave the better.

+ 2
13 years ago Shweta is behaving rude sumtym. but Palak. mine god. she is Genius backbiting any1...
thx

+ 4
13 years ago well i dnt think shweta was wrong somewhere! salt is a basic necessity!

i definitely dnt think she was cribbing so much.