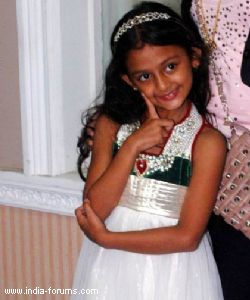 The very cute and talented child actor Shruti Bhist who was last seen as Indu in Zee TV's popular show Hitler Didi, will soon be seen in a different avatar in Four Lions' Arjun on Star Plus. Shruti has bagged another show in her kitty as well. She will be seen in an upcoming show on Life OK which is titled as Hatim.


Our source informed us, "Shruti will be seen playing the character of a little girl Aamra in Nikhil Sinha's upcoming Fantasy based show Hatim on Life Ok. Aamra interacts with Hatim and she gets to know everything about what is going on in the jungle. Shruti will start shooting for the show from 7th December onwards."

When contacted Shruti, she confirmed the news saying, "Yes, I am doing the show Hatim."

When asked Shruti about her character in Arjun, she added, "I am playing the character of Anjali in the show who is an intelligent kid. She is a chashmish like Harry Potter. I got a call from the casting sir and I gave an audition where I got selected for this role."

Shruti also misses her previous show Hitler Didi, as she told us, "I miss Hitler Didi a lot and sometimes I feel like going back to the show again. I miss Bunti Didi (Creative), Vikram sir (Director), Rati Didi (Rati Pandey) and Sumit Vats a lot. We all talk to each other and sometimes we meet up too."

"I wish to continue with my acting and I want to become a fashion designer in future. I also wish to open a Zoo in future," concludes Shruti talking about her future plans.

dugshuk 6 years ago Rati Pandey tv is boring because without you telly is just a empty lifeless box.. please come back

balebale4565 6 years ago Rati Pandey keep rocking .. you are the best tellywood actress

cuteness21 6 years ago Love you Rati Pandey
You are the best..
Lov UU

Reemachowdhury 6 years ago luv u sumit..come back soon dear.. all the best shruti