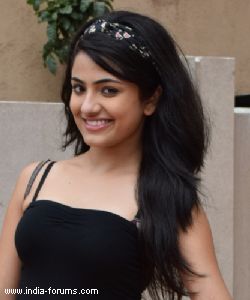 Television is becoming a stepping stone for the actors in making their way into big screen. TellyBuzz got in touch with Shritama Mukherjee who is all set to make her way in the regional films.

This petite actress rose to fame with Sony TV's Dekha Ek Khwaab and later was seen as Vedika in Life OK's Do Dil Ek Jaan. Currently she is seen playing main lead in Jawani Tarariri on Channel V.

Shritama Mukherjee is all set to act in a Tulu film titled as Soombe which means 'Sorry'! She will be seen sharing screen space with Rahul who too will be seen debuting along with her in this movie.

Rahul has done various theater plays, he is a VJ in a popular channel and is well known in South. While Shritama has stolen the hearts of the audiences' with her good looks, she is surely going to grab the attention of the viewers through her acting skills in this film.

Sounding excited about her debut on the silver screen Shritama says, "Yes it is my first movie. I have worked on the small screen before but this is my first step and I hope to give my best. Since everything is new to me I am getting to learn many things. I am happy to do this film and am working hard nowadays. The experience is just wonderful and amazing, I am ecstatic to shoot for this brilliant project and I am waiting for the movie to come out brightly."

Shritama Mukherjee is shooting simultaneously for her TV show and this movie. When asked her about managing both the projects at same time she says, "Before joining the show Jawani Tarariri, I had already signed for this movie, so I was very clear to take out time for the shoot of the movie. I informed the team about my commitment for the movie and they agreed on the same. As the show is bi weekly, I get to manage both the shoots, and it is not that difficult as both the teams are very understanding and supportive. It is just up and down traveling going on for the shoot, recently I had shot a song in Bengaluru and now I am back to Mumbai for the show's shoot."

Talking about the concept of movie and her role in the film Shritama Mukherjee says, "My character in the film is of a Kannadian girl who has come to Bengaluru to shoot for a movie and there she meet a guy named as Rahul and there the love story begins. It is a rom-com film aur picture ke andar picture bana rahe hai. The main essence of the movie is the songs. I just loved shooting for the songs as they are just amazing and it was an altogether different experience for me shooting and dancing for the songs."

Tellybuzz wishes good luck to bubbly Shritama Mukherjee for her debut on the big screen.

sanah12 6 years ago Congrattzzz shritima!!
You're just Awesome!!!
Love you loads!
Wish u all the best!!