Shraddha Nigam is thrilled and amazed at the manner in which her hubby and the heart throb of all girls Karan Singh Grover is sweating it out on the dance floor, preparing for the upcoming 3rd season of Jhalak Dikhhla Jaa on Sony. 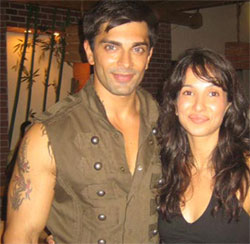 Featured Video
"Karan is a total non-dancer, and I was shit scared as to how he is going to cope up with the high levels of competition in Jhalak. I accompanied him on Day 1 and Day 2 of rehearsals, and he just did not know the 'ABC' of dance. It's like you don't even know to enter the kitchen and you are made to light the stove, and if this is not enough, you have to get the menu for the day cooked (laughs)", quips Shraddha.

"He was not even dancing, to begin with, and that was scary. But hats off to the man, he does not even have a frown on his face with this tight a schedule. He manages to shoot for DMG, goes for his rehearsals, and even gets his six hours of sleep, irrespective of a niggling back injury that he has been carrying for a while now. He is God's chosen child, I would say", adds Karan's Baliye.

Shraddha is now simply surprised at the improvement Karan has shown. "I could not believe what I saw day before. All thanks to his will power and hard work, he dances amazingly well now. His choreo has worked wonders on him, and he has really got the right pace of dance", concludes she.

It is heard that the very talented Nicole, who partnered Ronit Roy in the last season of Jhalak will be partnering Karan.

Ask Shraddha about plans for Valentines, and she says "I would love it if Karan gets to spend the entire day with me. I want him to get me flowers for the day, and want to see lots of movies with him".

Are you all eager to see Karan on the dance floor? Well, the countdown to the launch of Jhalak has indeed begun!!

+ 3
13 years ago i wish karan a speedy recovery and wish him alal the best for jalak. my vote fore you dear.

+ 4
13 years ago Aww see this is why i admire him..despite the fact he has a back injury he still manages to amaze us in DMG and now put his heart and soul into Jhalak and pretty soon will be rocking the dance floor! I hope he recovers soon...all my love and support is with him! ♥
Hehe I love Shraddha...i hope they have an amazing valentines day together. Bless them both

13 years ago awww... im soo excidteding to see him in JDJ and aslo i didn''t kno he has a back injury hope he ok!!!


get well soon! cant wait 2 see u in the finale LOL

13 years ago Gud luck Karan.
All of my Gud wishes for you.
Karan Rocks!!!!!!!!
and happy valentines day to both of you.
Sherry