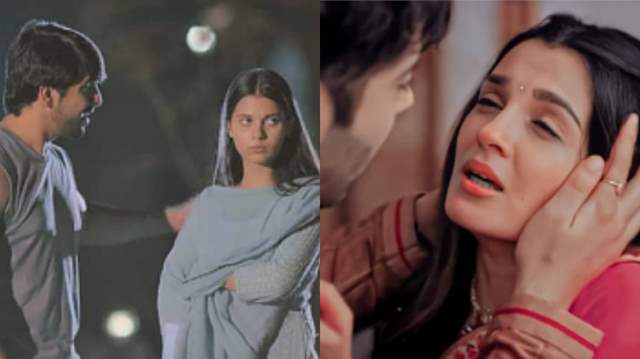 Star Plus show ‘Pandya Store’ is getting quite interesting with each passing episode. The current track of the show revolves around Pandya family deciding to go do a special pooja so that Dhara can conceive a baby. Meanwhile problems between Shiva and Raavi have aggravated.

In the upcoming episode, Krish shares an emotional moment with Suman. He decodes that Suman was just threatening to commit suicide but she accidently slipped into the well. Krish takes Dhara’s side and tells Suman that she shouldn’t be so rude with her. Raavi goes to the market to get pots and decorative items. She meets her college friends. Shiva sees it and gets jealous with Raavi talking so freely with the boys. They ask her about her husband. She thinks to herself that Shiva is on another tangent so she can’t make her friends meet him. She makes an excuse but Shiva thinks that Raavi is ashamed of letting him meet his friends. He gets busy with work.

Raavi’s friends ask her about her husband. Raavi proudly says that her husband has a very big heart and he resonates with his name Shiva.

Dhara tests negative for pregnancy and gets upset. Gautam consoles her that maybe next month they might get the good news. Furthermore, the family marches towards the mandir. The pots get leaked slowly. Anita rejoices and thinks to herself that the water in the pots will be leaked entirely until Gautam and Dhara reach the temple.

2 months ago Love KD as Shiva. Hope the MUs are cleared soon waiting for shivi romance ❤

2 months ago More MU on the way. Wish the yatra helps in resolving some MU between Shiva and Raavi and we see some progress in Shivi soon!!!

+ 2
2 months ago Yet again another misunderstanding between Shiva and Raavi. I can’t wait for it to be over soon. I also want Dhara to have her baccha soon so we can move on to other interesting tracks.