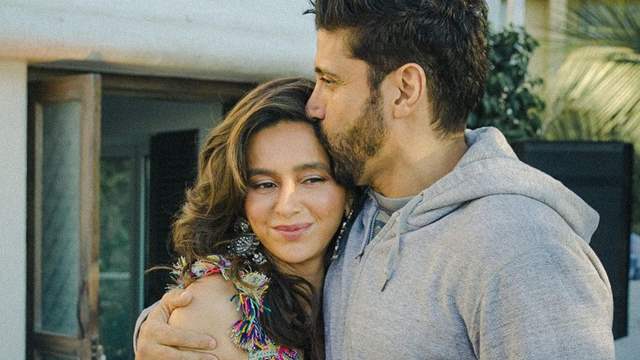 Shibani Dandekar and Farhan Akhtar have been married for about a month and are clearly at the finest stage of their relationship right now. It was a family wedding for the pair, and they've been showering fans with stunning photos and videos from the festivities ever since.

Shibani has made news yet again today after sharing a stunning video from her Mehendi ceremony, which shows her having fun, candid encounters with Farhan, Rhea Chakraborty, Amrita Arora, and others.

Shibani looked lovely in her multicolored ensemble, which was mystical, artsy, rustic, and bohemian in the video. Meanwhile, Farhan went for a cool and casual approach, wearing a hoodie and shorts. The newlyweds appeared to be having a great time during their wedding and even got a little funny when posing for the camera.

The video also showed the couple's magical moment, in which Shibani used Mehendi to write her and Farhan's initials on the actor's hand. Shibani's good time with her girl group was also recorded in the film, which was all about smiley faces, compassion, and festivity. Shibani conveyed her appreciation for her dearest friends providing her an incredible Mehendi celebration in the caption.

A part of her caption read, 'My two best friends threw me the Mehendi of my dreams filled with love and it was so felt! These two women have been by my side through it all! They have always provided me with unwavering love and support and been my biggest cheerleaders so of course, they had to plan the best Mehendi ever down to the last detail! Words can’t do justice to the love and gratitude I feel for them. They are my world.'