View Profile
When it comes to dropping your clothes (in public), Sheryln Chopra tops the charts. To describe her is really difficult. All we can say is that ‘She’s one of her kind only’. She’s been in the news for all sorts of reasons. Sometime back she even called the press and made it news worldwide that some one was uploading her pictures (almost nude) in her website. We wonder does being nude or semi-nude even affect her. 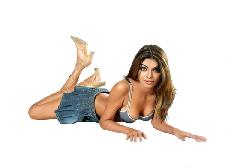 She even commented on Koena Mitra that the latter has a messed up nose. We earlier mentioned that ‘She’s one of her kind’. We will prove it in 3 different cases. They go like this…

According to Sheryln, her photos are so fabulous and so very perfect that anyone would display it at the museum. She also says that she has the perfect body and her shape will turn on any guy on this planet.

Now lets move on to our final case and this is one of her favorite topic –   “Female Sexuality.” The bold actress says that she thinks sex is very important for her. She even said that she sometimes uses sex toys as according to her; “no man can ever satisfy her.”

Ohhh… I forgot. I have more cases to recite. We asked her whether she is dating anyone, to which she replied, “I don’t believe in dating, I believe in mating”.

She boasts a lot about her sexy and killer eyes, so we asked her from where did she inherit those “mum or dad” and much to anyone’s surprise she replied, “I inherit these from my mom’s boyfriend.”

After hearing this all mouth were shut and we did what any normal person would have done (even who have a little bit of shame in them); thanked her and kept the receiver down.