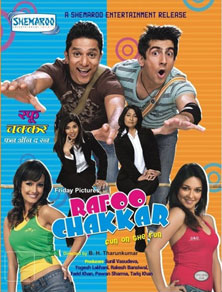 Featured Video
m ‘Rafoo Chakkar’ on DVDs and VCDs. This film is a perfect lazy Sunday afternoon movie, which can be watched at home with family members and which will tickle your sense of humour, urging you into a roaring laughter.

The story revolves around the four central characters of the film, whose mindset is – love life, enjoy life and live life, to the fullest. Yudhistir [Pappu], Aslam Khan [Munnu], Nisha Rawal [Millie] and Nauheed Cyrussi [Jullie], belong to different towns and have never met each other, yet they choose to run away when forced to get married by their parents.


On the run, Pappu & Munnu meet and get attracted towards Millie & Jullie not realizing that they are the same girls with whom they were to get married to.  Another twist comes in the story when Millie & Ju 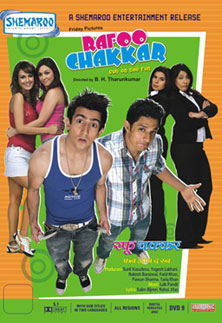 llie meet Kokila and Koena (Archana and Mita) two middle aged sisters who hate men and never want to get married.  But fate takes another turn and Kokila & Koena's father, who wants his daughter's to marry, dies leaving his entire property in the hands of trustees managed by Dilkhush (Shakti Kapoor) and Hasmukh (Sadashiv Amrapurkar) making a will which has a catch.

Meanwhile Pappu & Munnu are completely broke, they plan a robbery at Kokila & Koena's house not realizing that the old ladies are karate black belts and get caught red handed.

THE CATCH OF THE BOYS and the CATCH IN THE WILL pour further confusion and force the unbelievable to happen ….leading to hilarious comic situations unfolding the entire story.

The DVD of Rafoo Chakkar has subtitles in English and Arabic. Rafoo Chakkar is certainly a piece of entertainment with oodles of laughter and light moments.