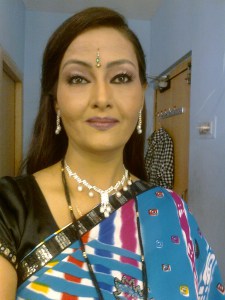 Star Plus' Suhani Si Ek Ladki produced by Panorama Entertainment has been grabbing the eye balls of the audiences' through its current track. While the show is doing very well, the makers of the show have thought of bringing in a new entry of dadi of the male lead Yuvraj (Sahil Mehta) which will be played by Shashi Sharma.

Earlier there was a buzz that Sanyogeeta Bhave will be playing the character of dadi.

Well, it is dadi who strongly believes in having only beautiful and fair girls in house. It is through her that the seed of differentiation will inculcate in the mind of Yuvraj.

We got in touch with Shashi Sharma to know more about her character and how will it shape.

She says, "Dadi's character is very spiritual and positive. Nobody disobeys her and she is very much fond of fair people. She thinks only those who are fair are good by heart too. Dadi has left everything on her grandson Yuvraj (Sahil Mehta) regarding his choice of the girl. She is confident enough that whichever girl he chooses for himself, he will ask for her approval."

Her entry in the show will be seen as she is returning from a pilgrimage tour. She has started the shoot and her entry episode will be aired sometime in this week.

Well, we seriously hope that Shashi Sharma's entry will definitely cause some stir amongst the audiences' and will create a high voltage drama in the upcoming episodes of the show.

We at TellyBuzz, wish Shashi Sharma all the good luck and success for her new venture.