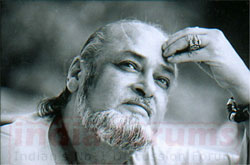 When Kapoor stepped out of his Mercedes at the Chandivli Studio complex in the northwest suburb of Powai and headed towards a makeshift shade erected for the launch of the serial, everyone was taken aback. Nobody expected him at the venue.

At a nearby studio stage, shooting for Zee TV's running serial 'Nagin' was in progress. It was lunch-break and all the artistes and other unit members grabbed the opportunity to rush towards Kapoor when they spotted him.

They scrambled and jostled among themselves to photograph themselves with the veteran actor. Kapoor smiled and obliged them all.

One upcoming actress was even heard shouting 'Yahooo' after she got herself photographed with him.

The mini riot that ensued around the yesteryear star who has virtually retired from films, proved the fact that, in terms of glamour, TV stars paled before their big-screen counterparts, even before an aging one.

Kapoor had come to attend the launch of Tandon's TV serial. Tandon has been his friend of many years, and had directed two of his hit starrers 'Professor' and 'Prince' in the late '60s. 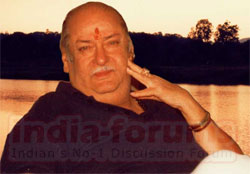 It was a dream-come-true date for the new artistes of Tandon's serial - Diya Dwivedi, Jalad Avinash Tiwwari and Piyush Sahdev - when the veteran actor personally blessed them on the very first day they appeared before the camera.

'Doctors advised me rest because of my indifferent health. So, these days, I am mostly at home. Today, I was getting bored sitting at home. I called up Lekh, hoping I would call him over for a chat. His wife told me that he was at Chandivili Studio. Without thinking twice, I got into my car - and here I am,' Kapoor told IANS.

Finding himself in familiar surroundings after years, Kapoor became a tad nostalgic. 'It was years ago when I last shot in this studio. It was the climax scene of my brother Shashi Kapoor's film 'Ajooba' in 1991. A set of a ship was erected here where I participated in a scene with Amitabh Bachchan and my nephew Rishi Kapoor,' Kapoor recalled.

Did he watch his grand-nephew, Ranbir Kapoor's film 'Saawariya'?

'No, I haven't. My health does not permit me to sit through three hours to a see a film in a cinema hall. But I certainly will when the DVD is released. After seeing the promos, I feel Ranbir looked fantastic. After all, it's in his genes,' the veteran actor said with a smile.