Television shows come and go but some bond that the actors create while shooting for certain projects remain with them forever. Such is the bond shared by Anjali Tatrari and Shaleen Malhotra. The duo has worked together in Sony TV show ‘Mere Dad Ki Dulhan’ wherein Shaleen played the character of Rishi, Niya’s (Anjali) love interest. However, in the show, Rishi and Niya’s love story ended abruptly but Shaleen and Anjali made sure to keep the charm of their friendship alive. Fans of the show were pretty upset with Niya and Rishi not getting a happy ending together and hence they wanted the duo to work together in another project.

It looks like the fans’ wishes have come true as Anjali and Shaleen will be seen together soon on a YouTube channel’s video. We asked Anjali about the reunion, she said, “Well, the fans really wanted us to do a project together. When this offer for YouTube video came, I didn’t know Shaleen will be paired opposite me. It was kind of an unexpected yet pleasant surprise. So, yes the fans will surely like it”.

Anjali also spread good words about Shaleen’s upcoming show on Sony SAB titled ‘Ziddi Dil Maane Naa’. The actress also send a beautiful bouqet to Shaleen wishing him luck for the show. Speaking about the same, Anjali said, “I’ve watched the promo and it’s quite appealing. I want to wish him and the entire team a very best of luck. I hope they rock. Shaleen has been always very supportive of my projects. He always makes sure to promote the same and I also did the same to support him”. 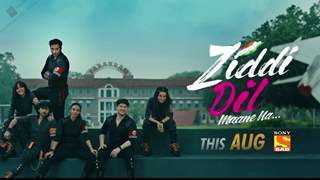 + 4
1 months ago ☺️wow Anjali and shaleen together