Shaleen Bhanot will soon be back on television in a new avatar, with Rajshri Productions' upcoming show on NDTV Imagine, Do Hanson Ka Jodaa. 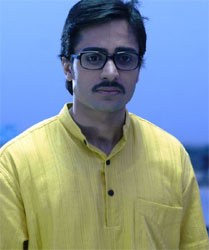 The handsome actor will don a typical 'Champu' look for the show, wherein he plays the very down-to-earth, realistic character of Suryakamal hailing from a middle class family. A simpleton look, oiled hair, a mustache to sport and a thick spectacle is what Shaleen will don in his upcoming avatar.

Shaleen takes this role as a challenge and says, "As an actor, I am lucky to have got such a role, where I will not play myself. I am really motivated and look forward to the various challenges that my new character will throw".

The actor has been receiving a great response for his new look. Talking about a particular incident, he tells us, "When I got into the Rajshri office with my new look on, a sound recordist friend of mine who was part of the Sangam team did not even recognize me. He took nearly 15-20 minutes and then came up to me and expressed his shock on seeing me in this look (smiles)".

A passionate guy when it comes to acting, Shaleen put an artificial mustache for his first look test for the show. However, since he was unable to smile and talk properly, he decided to grow a real mustache for the role. "Yes, this is my real mush. In fact, few weeks after my look test, I dropped in at Rajshri office, and Kavitaji  (Kavita Barjatya) on seeing me, said 'This mustache looks better than the one you wore for the look test'. Well, I had to later tell her that this is my real one and not a dupe (smiles)".

Shaleen who plays Suryakamal has a different voice, and a slightly different accent. He is a Chartered Accountant who lives only for his family. "The show speaks of how reality can be different from dreams, but this does not mean that reality is bad. It was a great experience to shoot at Mathura; we have shot at the actual locations of the Sabzi mandi and the dress stalls. It was great fun (smiles)", quips the actor.

Shaleen who wedded Daljit Kaur on December 9th at Jabalpur is right now busy with his new show, and states, "Honeymoon can wait. It's now the time to work hard".

Rajshri Productions' Do Hanson Ka Jodaa launches on 18th January, 2010. The time slot for the show has not been finalized yet.

Well, we will now wait to know the reaction of his fans when they see him in this new look!!

Oh well, I'm watching for Shubhangi! XD So I wish this show all the very best!

Aurum 10 years ago this is so rab ne. every show has had it.

bwoodlover01 10 years ago wow. sooo original. i guess the creatives def. watched rab ne. now that the look is out. too late guys./ this is so last year.

-Imu.M- 10 years ago Oh again Rab Ne look!
its time creatives actually put their head down for some creativity!

J3ny 10 years ago Thanxxx for sharing...

Awww....he is looking cute even in this look...

Again the inspiration is Surinder Sahani!!!!

LeenaLH 10 years ago he is realy a good actor cant wait to see him:)