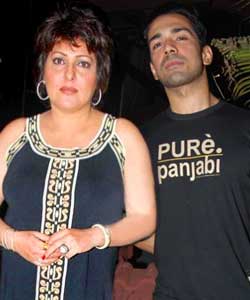 Kudesan, the very promising show from the stables of Shakuntalam Telefilms which was to launch soon on COLORS has been shelved. After going thro' a rigorous process of getting the best of the cast, and after having shot a bank of nearly 15 episodes, the channel decided otherwise, and decided to call off the project!! The reason apparently is the recent research done by the channel, which gave them an idea that they have to move away from the violent and regressive subjects to garner more eyeballs.

This show, like many other shows on COLORS was to open up yet another socially relevant issue, and was set against the backdrop of Punjab wherein the focus was on the issue of fragmentation of property including the land. Veteran actress Navneet Nishan was to play a larger-than-life role in the show. Abhinav Shukla and Devolena Bhattacchrja were to play the leads. Abhaas Mehta was slated to play the main antagonist.

Our source states, "The entire team of the show was upbeat as the product was shaping out well. The episodes that were shot in fact looked the best, and this decision of the channel stunned one and all. The production house and also the actors are apparently very disappointed as they felt that they had an ace up their sleeve".

Navneet Nishan who was to be one of the pillars of the show said, "In my 20 years of acting career, this is the biggest disappointment I have ever faced. We were working on this concept for nearly five months now. The episodes had shaped up very well. The channel, production unit as well as the actors were doubly convinced about the concept and thought we had a winner in our hands. Guess COLORS has now decided that they want to do milder shows. It's sad that the show has been called off now".

When contacted, the lead Abhinav Shukla too confirmed the same, "Yes, it is true that Kudesan has been shelved. It is upsetting, but I am now looking forward to other challenging roles".

When contacted, Producer Shyamashis Bhattacharya confirmed this piece of news saying, "Yes, the channel has decided to scrap the show based on the new policy they are catering to".

Initially, Kudesan was to launch sometime in January 2011, but the launch date was pushed further..

We tried getting a channel quote on the same, but were not successful..

Well, we can only say that this is indeed a huge loss to many associated with the show!!

Varsha.123 9 years ago Please bring back Bairi Piya 2 we fans are desperately waiting for this to happen

RagSia 9 years ago oh god!
plz abhinav dont loose hope
we love u
may be a show with parneet will happen soon
loooove abhineet together

.Angel 9 years ago aww this is so sad and I can't believe Abhinav walk outed on Geet for this show only to have it not happening