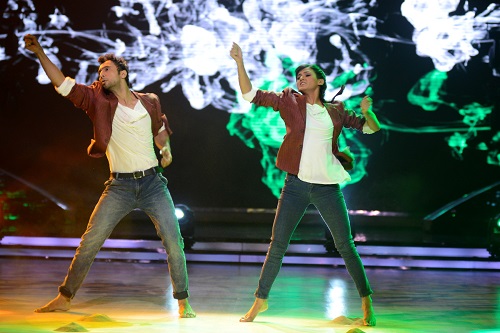 Colors' popular celeb dance reality show Jhalak Dikhhlaa Jaa Season 7 is all set to give a new challenge to its contestants in its upcoming week.

We heard that, "This week, the contestants had to swap their choreographers among themselves and had to give a power pack performance. The dancing diva Shakti Mohan has been paired with Punit. Punit was a part of the same dance academy with Shakti while they were a part of the Terence Dance Academy. They also were studying in the same college."

Shakti did a patriotic act with Punit which involved the use of sand. The act will convey a message to all those who leave the country and stay abroad and work for them rather than investing in our own country. It was a simple yet visually brilliant act along with a lot of dancing.

Shakti says, "Punit is an old friend and we used to study together in St. Xaviar's College together and he was my senior in Terence Lewis Dance Academy. We have had the best time together and I am so excited to work with him and perform together. He is very innovative and one of the best choreographers on the show."

After watching the performance of Shakti and Punit, judge Remo Dsouza commented that, 'I have got goosebumps after witnessing such a simple act.'

krarshanaval 6 years ago this was sand act of lyrical was marvelous and fabulous... love u shakti mohan

lilac_dreams 6 years ago Shakti Mohan your act on patriotic theme was awesome!!!

sakura20 6 years ago awesome awesome...
luvd ur performnce shakti mohan...
it was beautiful...

Torshaluv 6 years ago Very much excited for ur performance diva. May ur all wishes come true. Lots of love Shakti Mohan.