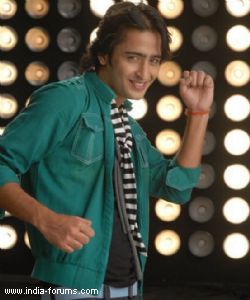 Source report that Shaheer Sheikh, popularly known as Anant of Swastik Pictures' Navya, has an attitude problem, after the popularity that his show has garnered.

According to our source," Shaheer shows a lot of attitude on the set. He has an air about himself.  He plays a lot of pranks on his co-stars which eventually annoys them after a certain point."

We called the actor to ask about the rumours, to which he replied, "Yes, I and my on-screen brother play pranks with our co-stars but I have no clue about they getting annoyed. "

When asked about his attitude and whether the accusations were true, he replied with a simple yes, "Yes I have."

Well, with Shaheer confirming it, we wonder what is the attitude for...

LAK122 8 years ago u r bestest shaheer. u dont nay attitude ..we love u so much be blessed

zar27 8 years ago Sorry to say Shaheer, one shudn't carry attitude when you have just one mainstream show in ur kitty. There are many others tv actors who have done many hit shows, but still don't have any attitude.

I am ur big fan, but i didn't like this as u had itself confirmed it.

Neelam03 8 years ago I dont think he carries attitude... shaheer is the best in telly world...i love u sooo much my dear shaheer...keep rocking sweetheart

Twitz 8 years ago No, i don't think he carries any attitude. he is down to earth. love u shaheer :)

reshkids 8 years ago You are the best and no matter what anybody says,you will remain the best

shanukit007 8 years ago I m Thinking ki why Does IF not withdrawing this article???????/