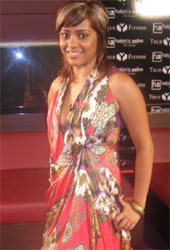 UTV Bindass gets all set to roll out the blue carpet for its first celebrity participant, Shahana Goswami. The charming and extremely talented actress who shot to fame with her critically acclaimed performance in Rock On! will be a part of Bindass Blue Carpet to get a makeover for her first ever gig at the IIFA awards in Macau!

IIFA is considered as one of the most prestigious awards that recognize exceptional performances in Indian cinema and has nominated Shahana Goswami for the category of Best Actor in a Supporting Role – Female.

Shahana, who is extremely excited about being a part of the IIFA extravaganza, wanted to put her best foot forward for the award ceremony and hence came to Blue Carpet for her fantastic makeover!

She did not change her look for a long time due to professional commitments, but got on to UTV Bindass Blue Carpet to get a much deserved makeover. Once on the show, Hakim one of the country's most celebrated hair stylists, and part of the Bindass Blue Carpet's panel of judges did what he does best, he turned Shahana into a complete Glam Doll. With the short hair which is the rage of this season and light brown highlights Shahana now looks refreshed and raring to go.

On the entire Blue Carpet experience Shahana says, "I've got this makeover done by Hakim Aalim. I had not had a change as there were many other commitments. Now, since I will be going for the IIFA as an award nominee, I decided to go in for a change of look. Not many people will recognize me, as they have seen me in a certain way. But this look makes me look younger. It's quite crazy."

Catch all this action on Bindass Blue Carpet this Friday, 12th of June '09 at 7 PM only on UTV Bindass.

shreyashah71 13 years ago definately her haircut has gone wrong

she was spotted at iifa awards in a very short boycut

very very shorter than this

probably she chopped this disaster on top of her head

13 years ago oh god this is horrible shahana dont make a fool of yourself yaar!!!! dat hairstyle looks devilish and highlights are even more worst coz dat brown hair doesnt suit ur dark complexion she was better before

13 years ago this is perhaps the worst makeover i have ever come across is shahna planning to scare ppl at iifa by going there like this ???? shahna plz revert to ur earlier look this is obnoxious

13 years ago omg she looks absolutely horrible. What were they thinking, I wouldn't look like that even if the stylists paid me. Ah just a disaster, hair cut and color couldn't be any worse.

13 years ago Shahana just needs to lose some weight and the hair colour doesn't really give her that boost. It makes her look dull.

+ 5
13 years ago She looked better before the makeover! They made her look like a desi hip hop singer with blonde highlights and all, looks cheap, doesnt suit her personality at all.