'Health is a very important issue. Unfortunately, political parties in our country do not give it the required attention. As it mainly concerns rural women, the issue goes completely unnoticed,' Shabana told reporters here. 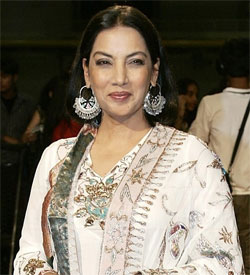 'There is need for women empowerment,' she said, adding that the government, political parties and people in general should take up the issue of women's health.

The actor was in the capital to launch White Ribbon Alliance of India's (WRAI) global campaign 'Deliver Now for Women and Children' in India.

WRAI is an alliance of NGOs and concerned individuals from across the world. Sarah Brown, wife of British Prime Minister Gordon Brown, is one of the patrons of the alliance.

'Deliver Now' was launched globally Sep 26 last year in New York. It aims to lower maternal and child deaths across the world.

Globally, over nine million children below the age of five die every year, of these 2.1 million deaths occur in India alone. Experts say nearly 40 percent of these deaths occur in the first month of childbirth.

Shabana, who is also the ambassador for Safe Motherhood - an awareness drive by WRAI to safeguard a mother's health during pregnancy, said maternal mortality is a very emotional issue.

'I am associated with WRAI for eight years. It is a very emotional issue. Imagine... the number of women we lose is equivalent to 400 plane crashes in a year.'

'It is sad that on one hand our country is emerging as a global power and on the other the health issues of women in rural areas go unnoticed. Even if it is not an institutional delivery, it is the right of every human being to give birth without any crisis,' she said.