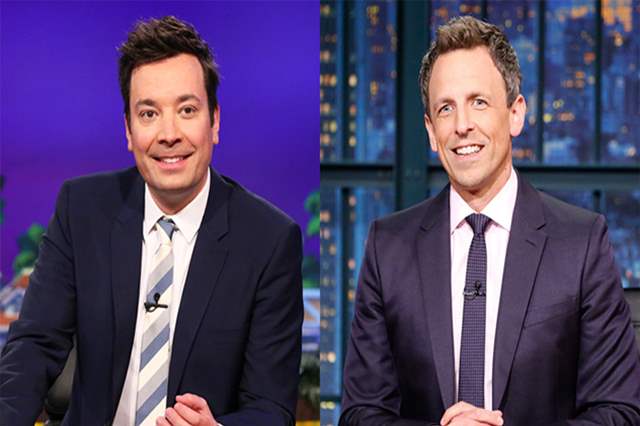 Only recently, almost all the leading late night show hosts returned to studios for shooting. However, for almost two to three months, they shot remotely from home. One of the lot, Seth Meyers, opened up on what it's like shooting late night from home after producing 60-plus shows with no audience after in-studio filming shut down five months ago due to the coronavirus pandemic.

Meyers appeared as a guest on The Tonight Show Thursday night, where he and host Jimmy Fallon chatted about early March, before the pandemic shut down non-essential businesses in New York, as well as the challenges of pivoting to a virtual, work-from-home process.

Fallon, who was one of the first late-night hosts to go back to the studio, kicked off their conversation by recalling Meyers' early March appearance on The Tonight Show, which involved a bit where both hosts avoided shaking hands, but "mistakenly" touched each other's faces. However, Meyers recalled the incident somewhat differently, noting that it was less a misunderstanding, and more the hosts being flippant.

"Well, I don't think it was a mistake," Meyers said. "I look back and I think the mistake was that I was being very glib about what turned into a pandemic. And I believe I was saying that you're not supposed to touch your face, but nobody said anything about touching each other's faces, which was like 'Haha,' you know?"

Fallon followed up, "That's right. Then the audience laughed, and I laughed, and then we did it," before the two shifted to talking about Meyers' filming from home experience. The Late Night host shared that in the beginning, the hardest part "was just figuring out the tech," before discussing the tools his team adopted to deliver their show virtually.

"With things like 'A Closer Look,' which are really long scripts, we figured out a teleprompter app, but you kind of have to set the speed in the beginning, and you're kind of married to that speed," Meyers told Fallon. "And obviously, the source video can then be edited, but nothing's worse than knowing that my staff is watching me when I screw up."

"I think we've all figured out you just got to move ahead a lot faster," Meyers told Fallon. "I think there was a sense that we're all waiting for our laughs that aren't there, but it's more just that we were programmed to work in front of an audience, so you don't want to talk over laughs. You don't want to have people miss the setup for the next joke. And it was just learning like, 'Oh, I don't think people at home are laughing so hard they can't hear the next joke.'"

My emotional memory helps me shape my character in Anupamaa: ...
55 minutes ago

Barun Sobti says his transformation for Halahal was 'a bit ...
57 minutes ago