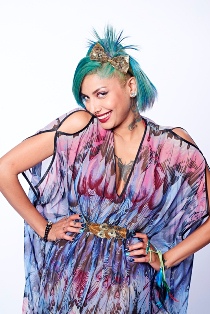 With new twists planned in this season of Bigg Boss, clearly Flight BB 08 has taken the route of surprises. Bigg Boss has vested autocratic powers to the Secret Society over the passengers of the flight. They are to control the fate of everyone on this journey.

Only 6 passengers received their luggage and 6 were left waiting, as the Secret Society announced that they would have to complete their task to the satisfaction of the Secret Society to acquire their luggage. Upen Patel , Minissha Lamba, Daindra, Karishma Tanna, Praneet Bhatt and Sushant were made to complete a task called,  Qurbaniyan', where they were asked to part with some personal information in return of their baggages.

The Secret Society were pleased with the answers of everyone except Diandra and Praneet, because of which they were not given their luggage. While Diandra chose to borrow clothes from her fellow passengers, Praneet has decided to take a stand and refused to accept clothes from anyone else on the flight. Dressed in the attire of Shakuni Mama', that he so brilliantly portrays, Praneet has just reversed his Shakuni costume and has chosen to remain in this attire till  the time he is not given his luggage by the Secret Society.

From the very first day, the passengers are being made to go through the grind, one grain at a time, as they would be required to make sacrifices on every step of this journey.