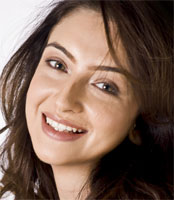 Featured Video
Says she, "I have signed up for a Punjabi film. The shooting will take place in India, London and Canada. Therefore I won't be in the country during July-August." Saumya has high hopes for her film career as she goes on to say, "I want to do some quality work, something that I can be proud of later. I want to be part of not just Bollywood but of world cinema."

Saumya truly has dreams to reach beyond sky. She says, "I want to feel what its like to rub shoulders with the best among the world. And if I have to dream, I'd rather dream big. So I'm not slowing down until I get my Oscar."

There's another reason for the charming girl to be happy as she has  been declared the Best New Anchor (female) in a recently held award ceremony. She cannot contain herself as she says, "I'm really happy that we are being recognized and encouraged. It has surely added to my enthusiasm to be a part of this field."

She is also slated to continue as host for the second season of Dance India Dance. The actress was also seen playing sister of Kareena Kapoor in the hit Bollywoof flick, Jab We Met.

We wish her all the best for her career!!

kulmona 12 years ago I thought she looked familiar. Even though she had a small role in JAB WE MET, I noticed her and thought she was cute.

Jassi01 13 years ago All the best to her!!! I agree with Roben and Parminder too. I hope she is paired with Jimmy Shergill not Harbhajan Mann.

13 years ago wow..she is so cute..i hope she is paired opposite harbhajan Mann

bijayitasahu 13 years ago though her role in Jab We Met is small but she acts very well.
her anchoring in Dance India Dance is awesome

13 years ago yeah i agree Punjabi movies are better than Bollywood these days..good luck to her

+ 3
13 years ago I agree with Davide ... Punjabi Films are doing way better than some Bollywood films ..