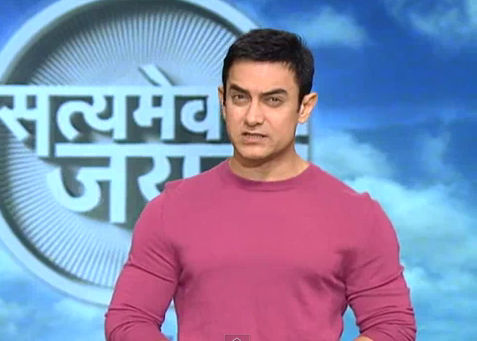 Heart stirring and real hero was how viewers lauded the first episode of the second season of Satyamev Jayate that focused upon the issue of rape in the country.

The much-awaited talk show, with the tagline Jinhe desh ki fikr hai (those who care for the country), went on air on Sunday and its host and Bollywood star Aamir Khan once again struck the right chord.

The show received around 12 lakh missed calls in two hours from people who want to join the fight against rape.

Titled Fighting rape, the first episode began with the narration of the Dec 16 Delhi gang rape case, in which a 23-year-old physiotherapy intern was brutally gang raped in a bus.

With some more cases of acid attack, rape and molestation, Aamir then shared the statistics of rape cases in India revealing that around 1,01,041 pending rape cases were reported till 2012, out of which 3,563 were convicted in an year, 11,446 cases were acquitted or withdrawn and 86,032 were still pending.

He informed the audience that after the Nirbhaya case, some changes were made in the Indian law, which said that not lodging a FIR in such cases is illegal and the complainant should also receive a copy of the FIR made. If a police official refuses to report the issue, one can complain to SP or ACP and the concerned official will have to undergo two years' jail under section 166.

Aamir also interviewed Urmila Singh Bharti, a Dalit from Madhya Pradesh, as well as Suzette Jordan, who discarded the anonymity of being known as the 'Park Street rape victim' to fight for justice.

The two rape survivors narrated their respective horrifying tales and fight for justice.

Just like last year, one could see the impact of the show on social networking site -- Satyamev Jayate is trending on Twitter and is at the fourth place.

The audience has praised the show. Here's what a few of them had to say about the first episode:

Abhishek Hiran: The first episode was a tight slap to the judicial system of the country. Can't have a better host than Aamir Khan. 'Satyamev Jayate'.

Anish Agrawal: 'Satyamev Jayate' you are the real hero. The lion of Bollywood, future generations will be thankful for your courage and humanity.

Bhargav R.K: 'Satyamev Jayate' serves its purpose if it makes even one single person think. I hope its changing India from within. Kudos Aamir.

Nilanjana Chatterjee: 'Satyamev Jayate' kudos to you guys for bringing up this issue. People stop thinking about innovations, this country needs to learn its basic civic sense first.

"When Aamir Khan understood the plot point, he himself suggested": ...

7 years ago Aamir Khan is Best Hero on Tv screen
But he is best in real life
Your works is Great.
I supported this.
I think it can changes our thought

+ 2
7 years ago A big. Thanks to Samir. Hopefully all safety done n government listen

+ 2
7 years ago Aamir Khan you are superb...this is an awesome show...hats of to you keep going

7 years ago Really hope that this show can actually bring some changes to India rather than it being all just talks. Don't get me wrong, I love Satyamev Jayate but really am hoping that it brings a revolutionary change into the country so India can become a more developed country. Right now it sucks to see that a country whose religion prays to Goddesses treats women like trash. Hopefully this show will bring advancement into India.

7 years ago Satyamevajayathe rocks!!!!Thank u Aamir for being courageous enough to shed light into the most barbaric act committed by humans .

+ 2
7 years ago Amazing start to Season 2...a very moving and heartbreaking 1st episode and also something of an eye-opener as it exposes our joke of a judicial system.

If this episode could make even the smallest change it would go a long way. Kudos to Aamir Khan and team.

7 years ago Satyamev jayathe is a very good show
hats of Aamir khan.