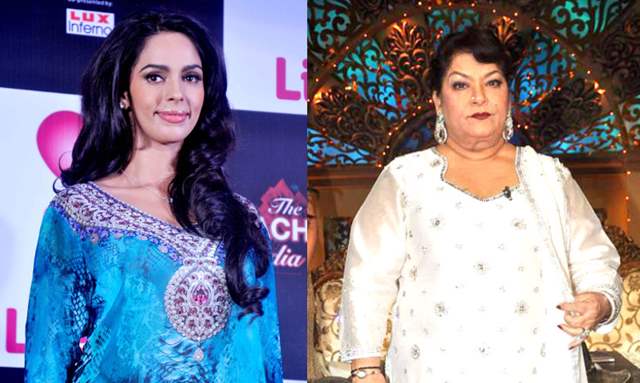 Saroj Khan breathed her last on Friday after suffering a cardiac arrest at the age of 71 and her daughter said that the prayer meet would be held within three days. She was admitted to a city hospital on June 20, after she had complained of breathing issues.

Now, several Bollywood celebrities have shared their condolences at the death of the ace choreographer and their master ji.

Saroj Khan was the one who choreographed most of the iconic songs in the 90s and even continued to serve the Indian film industry for almost four decades. She has paved the way for many Bollywood celebrities and artists. She proved to be a stepping stone for actresses - Sridevi, Madhuri Dixit and many more. She even took Farah Khan under her wing and helped her hone her skills and the talent she possessed and she even expressed grief over the choreographer’s sad demise.

Now, in a recent interaction with SpotboyE, Mallika Sherawat shared her condolences to the sad demise of the ace Choreographer.

A great legend has left us today. Saroj ji was India's most loved, popular and exemplary choreographer. The world knows Bollywood dancing for the Adas, nakhras, thumkas and Saroj ji was the one who ensured all this was amalgamated so gracefully in any song she choreographed.

Mallika added, “Saroj Ji choreographed me for the iconic 'mehbooba o mehbooba' remix and it was an absolute honour to have learnt from the legend. She was not just India's ace masterji but a pure soul and human par excellence. Rest in peace Sarojji."

The ace choreographer won three-time National Awards for some of the most memorable tracks, including 'Dola Re Dol' from Sanjay Leela Bhansali's 'Devdas', 'Ek Do Teen' from Madhuri -starrer 'Tezaab' and 'Ye Ishq Haaye' from 'Jab We Met' in 2007.

Meanwhile, on the work front, she last worked with Kangana Ranaut in ‘Manikarnika: The Queen of Jhansi’ and Madhuri, Alia Bhatt and Sonakshi Sinha in ‘Kalank’.