Music is not only the universal language of love but a sign of unity, peace and strength. Who can say that less than two months ago on 26/11, Mumbai’s Gateway of India was besieged by terrorists whose sole aim was to shake the spirit of the nation. What they did not bear in mind was that this was the very spirit that helped us bounce back to normality in the shortest possible time. Zee TV takes the initiative to salute the martyrs and stand tall in front of the perpetrators by holding a musical evening at The Gateway of India, Mumbai. The time to unit and show our strength has come. 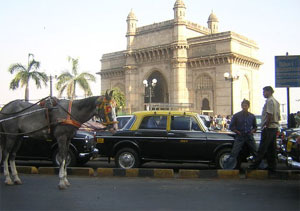 Featured Video
The historical finale of SaReGaMaPa will be held on 24th January, 8pm onwards on Zee TV. For the same, the Government of Maharashtra has solicited its full encouragement by making the finale a part of ‘Saptarang’ their cultural festival. The evening will be attended by those who want to pledge their support for the unity of the nation, including politicians and film celebrities, as much as the common man.

Speaking on the same Mr. Punit Goenka, CEO ZEEL, “Holding the finale at the Gateway is our way of telling the world that the spirit of India is unshakable. Music has traversed many boundaries and this time around we want to show everyone that we stand tall in face of all adversities. Earlier shows of Hero Honda Sa Re Ga Ma Pa Challenge have taken place in historically relevant areas such as The Wagah border, The Taj Mahal, The Ganges in Benaras, The India Gate, to name a few. This finale at The Gateway will go a step further in our endeavor to hold music at its pristine altitude. We are a channel that has always been mirroring the sentiments of the people of Indians worldwide and we want to spread the message across the world with the telecast spreading to 165 countries across the Zee TV network.”

The performances will begin with patriotic songs sung by the finalists Vaishali Made, Somen Nandi and Yashita Yashpal. The mentors Himmesh Reshmmiya, Adesh Srivastav and Pritam will be present along with Shankar Mahadevan. The host of the evening is none other than our very own Aditya Narayan.

So tune in on 24th January at 8pm on Zee TV to pay a musical tribute to the indomitable spirit of India.

Rinkie.v 13 years ago Could you please advice from where can i get entry pass for Grand Finale which is going to be held on 24th Jan,2009 in mumbai?

JinJin 14 years ago I think emmi is a very cute man...

I really love him such a sexy boy *_*