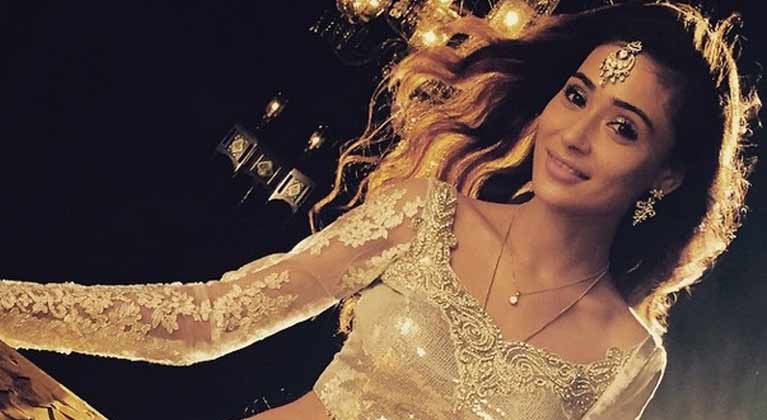 Petitie Sara Khan, who is portraying the character of Icchadhari Nagin on Colors' Sasural Simar Ka will soon unveil her real identity.

Sara Khan's (Roli) identity will be exposed in front of the Bharadwaj family amidst Maha Shivratri celebrations. The actress has recently shot for a promo, where she is decked up in her attire.

We contacted Sara Khan for her new look and she says, "It always feels awesome to try a different look every time. This is an Indo-western look which is a new kind of look donned for the audience, who will see it on television. It's an elegant golden Lehenga and I hope people like it as when you try something new there are comments pouring in so I just hope it turns out to be good."

Well it would be nice to see Sara Khan is a different look!

+ 2
6 years ago no golden lahenga the lehnga is silver white!! bakwas!

6 years ago sara khan is looking damn gorgeous in this costume.

6 years ago sara khan is looking so beautiful and her acting is too good.

+ 2
6 years ago Sasural Simar Ka is No 1 on Colors. In top 10 of all serials, u can hate him but still they rocksss all actores meam full team. Love u SSK team.

+ 2
6 years ago Keep up the good work and looking forward in a better show...

6 years ago Sara khan u r much much much beautiful than other ugly actresses.
I know show is crap but u r awesom sara.
U r far better than ugly n overacting ki dukan hina khan aunty.
Adorable saru pls cmebck in new awesom show on colors.
Love u.
Keep it up.
Gud going.
Pls leave dis show immigetly.
U stole every hearts ouR princess,mallika-e-husan.

+ 2
6 years ago What the??? Ichhadari nagin. GOD end this show like real soon. What crap is this show

infact this show must get an end know..! crap