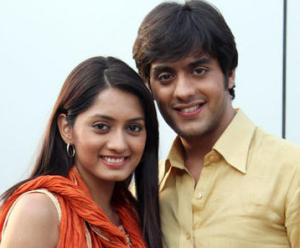 With Star Plus' new line up of shows, the old one has to bid adieu. Thus, Sapno Se Bhare Naina is moving towards its end.

A source reveals about the ending track, "A decision was made between Naina (Parvati Vaze) and Daksh (Gaurav S Bajaj) that they won't take a step forward in their married life until and unless the family tiff gets sorted out. As the show moves towards its climax, the family differences are sorted out and Naina and Daksh finally consummate their marriage."

"The consummation scene between Daksh and Naina would be the last sequence of the show. The sequence will be shot today", adds the source.

We contacted Parvati Vaze who confirmed, "Yes, as everything is sorted out, Naina and Daksh have finally decided to consummate their marriage. The track would be shot on the famous song Bahon Ke Darmiyaan…"

When asked Parvati about the whole experience with the show, she merrily shares, "It was a life changing opportunity for me as I was related to TV with commercials. I would definitely be in touch with TV but I would love to take a little break so that my comeback is energetic."

All we can say is fans would definitely miss the 'Daksh-Naina' chemistry!

Patrarekha 8 years ago it was a great show..better than any popular show..but for bad timing it failed to get much trp...and now its ending so sad...i loved daksh-naina couple too much..hope to see them again together...

but why sp is not ending hamari devrani??

arjun12 8 years ago it is better to end..last few months it shown so much crap..really gonna miss u Gaurav and Parvati..love them both

-Lazy- 8 years ago it was very nice show.and parvati is very beautiful.if the time slot would change then iam sure it would be very popular.

Spot 8 years ago Very sorry they decided to stop this show, it is my favourite

ninag 8 years ago Hamai devrani and ssbn are going off air. Will miss ssbn.

alina_lale 8 years ago i m sad my favourite show on star plus is going off air : (
DekshNa rocks

.m.a.r.y.s.i.o. 8 years ago its bad that ssbn is ending so soon...well it was very nice to watch till that sonakshi track but anyways all the best to gaurav and parvati for their future assignments