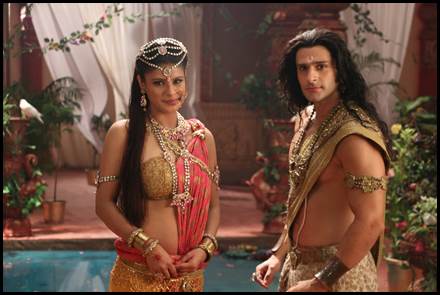 The upcoming track is going to have an exciting twist for the audience to witness. Vikramaditya portrayed by Karan Suchak will be seen getting wooed by Roopmati enacted by Sapna Thakur. Yes you heard it right! Vikramaditya who goes early in the morning by the riverside to pray to the sun will be seen getting trying to get distracted by Roopmati who tries to draw his attention by singing a song. But Vikramaditya who is does his prayers with full concentration doesn't get distracted , so in order to get to him and make sure he sees her, Roopmati comes up with a plan B.

Suddenly her boat turns upside down and she begins to drown and Vikramaditya who notices this goes to her rescue. And as he jumps in the river and rescues her and gets her to the river bank, he realizes that he has got tricked as he gets trapped in the Roopmati's Lok Shringar.

What are Roopmati's intentions? Why does she want Vikramaditya's attention?

+ 4
9 years ago Great that Big B is giving free & easy articles to desperate reporting agencies by way of his blog lol...