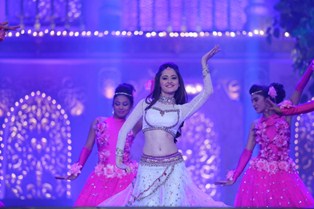 When Sanjeeda Shaikh came to preview her act for Star Plus' Holi special Masti Gulal Ki! She was so excited so see the Punjabi act which was choreographed for Veera (Digangana Suryavanshi) that she insisted a change of song for her and instead preferred to perform on the song allotted to Veera.

On her insistence the creative team decided to let Sanjeeda have her way and revised the entire schedule and the Punjabi song which was originally not meant for her was added to her performance. Digangana, who had to adjust to this change, is now performing on a hit dance number from a recent blockbuster movie in an avatar she has never been seen in before.

"I was in awe when I saw the choreography and the song was extremely catchy. I felt that it would be better to perform on that song instead, the creative team agreed and I changed my act", says the pretty Sanjeeda Shaikh.

Everyone knows the graceful dancer Sanjeeda is so it comes as no surprise that her performance will be a dazzling one!

iamsenadam 6 years ago Sanjeeda Shaikh you simply are the best..love you!
Can't wait for it. #EkHaseenaThi

fm05 6 years ago Granted Sanjeeda is one of the best dancers from the Telly actors but I think this insistence on overtaking someone else's alloted act upon the 11th hour is rather insensitive and rude. Quite diva like. She may be able to learn a new dance routine pretty easily without much rehearsal but spare of thought for the Veera actress who had to learn a new act. As it is Sanjeeda dances in any and every stage show available as that is her strength but I think it's gone to her head.

iamsenadam 6 years ago Sanjeeda Shaikh you rock! Love you loads! Excited to watch it.

And eagerly waiting for Vishal Vashistha's dance too!!!

Aly Goni questions 'what about justice for Sushant Singh ...
9 hours ago