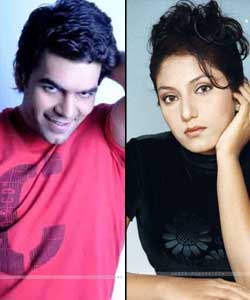 Telly Buzz had earlier reported about the good news of Leela getting her new Bahu in Ketkie.J. But seems like some are not happy about the developments in the show.

We are talking about Shishir (Sanjay Gagnani) and Jigna (Neha Prajapati), on screen Daughter and Son in law of Leela (Apara Mehta).

A source informs, "It so happened that the Production house signed Sanjay Gagnani and Neha Prajapati  informing them that their track will be shown in the initial episodes of the show. But now the situation is such that their track has been sidelined and have not shooting for a long time now."

We also hear that both of them have been upset due to this and have also talked about this to the Production House. Following this we hear the creatives will be adding their track in future.

We contacted Neha Prajapati and she said, "I think such issues happen between actors and the production. And now our track will be introduced again by shifting us from Pune to Mumbai so that we could be seen in the frame."

When contacted, Sanjay R Gagnani states, "Things aren't the same as we were promised before. When I signed the show, I was told I will be shooting 25 days a month where Sishir's and Jigna's track will go simultaneously with Leela's. But since I am unhappy with my track, I am already in talks with some production houses for another show. And will definitely sign a new show if a good character is offered. But for now I am not leaving this one. After all what is the harm in doing two shows when an actor gets to portray his ability at two different places."

Let's see how their take shape from now...

sonamd 9 years ago hahhaha!!! everybody whether small or big are fighting over the screen space...i think its time 4 us 2 buy 1000 inch lcd tv so that we can see everybody in the same frame irrespective of wdr we want 2 watch or not...so guys worry not!!!! pune will no longer seem farther than mumbai...chill maro!!!

cookie2006 11 years ago it would be a better choice as he would look more like him ... i like hrithik more than abhishek as an actor though. don was an excellent movie made by farhan evenif it was remake and i am looking forward to the next one...

-Preeti- 11 years ago would b looking forward to this ...am sure hrithik or abhishek both would have done great job for this movie ... but Amitabh is the real Vijay

HPCRAZY 11 years ago When exactly was Hrithik adjudged the look-alike of Jesus christ?? & who exactly did that adjudication?? Wouldn't it be doing a disrespect to Jesus Christ(who is considered to be a divine-being,right?) to say that a mere actor(never mind how good looking he is) looks like him?I'm not a Christian by religion but I was a bit shocked to read that part of this article;It just doesn't sound right to compare great religious leaders to mere humanbeings,does it? :(

isra2811 11 years ago remake of son was just a crap done by mr. farhan... i dont know why people destroy someone's master pieces done in the past.. I know his dad had produced it... but why is he still planning to remake it.. any ways gud Kjo.. and one more thing hrithik cud have done it and would done justice to the role and the movie.. But what I believe is Abhisheik will ruin the whole movie... Kjo nahi plz kabhi nahi abhi ko sign karna yeh nahi ho sakta.. plz...

Mazzy101 11 years ago hrithik is definatley man of the year! i dnt blame him for refusing, evn though it mightve bn gd wth him in it. bt he obviously is busy, hes a wckd actr, if he thnks tht he cannot stp into mr bachans shoes, thn its up to him. bt i thnk he cd hv done it! i dnt thnk tht abhishek cn step into his dads shoes! bt oly time will tell.

kal-el 11 years ago noooooooooooooooooo plz no remake of agneepath, its a legendary film y destroy it :(

remixrulz 11 years ago I too loved the remake of don.. srk moulded into the character and yet thr was somethin new to offer and wasnt just a copy of the old don..

while abhi seems like a good choice..i hav a feelin he'll just end up bein a photocopy of his dad from agneepath n wont b able to evolve the character and get a shade of himself in d character..

either way, i gess only time will tell..

Ranveer is Fulfilling his Husband Duties towards Deepika? ...
4 minutes ago