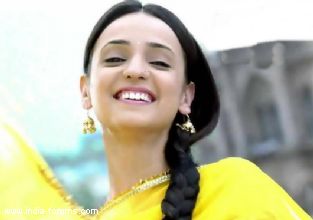 Sanaya Irani, whose previous show 'Chhanchhan' reportedly missed the bull's eye due to lack of chemistry with her former co-actor Farhan Khan, is back with a new TV show 'Rangrasiya' and she is not nervous about her co-star Ashish Sharma.

"I am not nervous because I have a fabulous actor opposite me. Ashish is amazing and I think I will learn so much from him. It is a very good feeling. It is very rare when you feel you will get to learn from somebody else. When there are two people good at their work in a scene, it can't go wrong," Sanaya told during launch of 'Rangrasiya' here on Thursday.

The new fiction is based on an intense love story between a village girl named Paro, played by her and a Bharat Suraksha Dal officer Rudra portrayed by Ashish.

The actress, who has been part of shows like 'Iss Pyaar Ko Kya Naam Doon?' that are based on love and hate relationship between protagonists, says her new show has that element but are not similar in any other way.

"Love and hate was there in another show of mine as well. But this character is different from what that character was. The story is completely different and so is Paro. It's not something that I've done before," she said.

Sanaya says unlike the bubbly roles that she has done in the past, this one is about a village girl, who is not strong right now but with time one can see lots of shades to her character Paro.

Shot in Rajasthan's Jaisalmer as well, the TV star with a thin frame faced lots of difficulties.

"Outdoor is always difficult. Firstly you wake up at odd hours like 4 in the morning. Then make-up. We shot for few days in Jaisalmer and it was hectic. It was very hot. My make-up would melt seven minutes from the time I stepped out from van and in Rajasthan there is hardly any shade, so can't run away from sun. That was harsh but fun," said Sanaya. 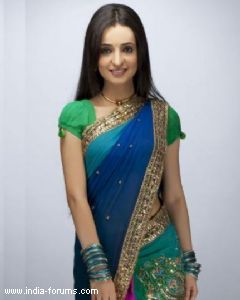 She says she also lost weight while shooting in the desert area.

"I got burnt in the sun and lost a lot of weight. I have lost four kgs while shooting here. I was made to run over and over again on the sand and that is not easy.

"I was told to run fast, but you can't do that when the sand is sinking. And then I got angry because after all that running they showed it in slow motion," said the actress, who briefly appeared in superstar Aamir Khan and Kajol Devgn starrer-'Fanaa' in 2006.

After putting so much effort in the show, produced by Abhinav Shukla and Saurabh Tewari of Nautanki Films, she has high expectations from it.

"I will be shocked if this doesn't work out. Not because my career is going somewhere. I believe an actor is an actor whether you are in a flop or hit film, it doesn't matter. We have put in so much hard-work.

"Saurabh has done it on such a large scale. It's absolutely brilliant, the story is amazing and everything is right," she said.

'Rangrasiya' will be aired from Dec 30 onwards on Colors.

Haridas 5 years ago Ashish Sharma missing your action. TV is so boring without you on screen. Pls come back soon...

Haridas 5 years ago Ashish Sharma and Sanaya Irani loved to see you both again in one show.

YuSiAi 6 years ago Please act in the same show again Sanaya Irani and Ashish Sharma... Miss u two so much

kalin56 6 years ago They sure have developed excellent chemistry

Millerrr88 6 years ago I agree! They have chemistry! & they look awesome together!

sun2011 6 years ago Sanaya Irani and Ashish Sharma - you two have sizzling magical chemistry on screen and a cute off screen friendship offscreen! May you both win accolades and awards for RR soon and may this show be the next rage for years to come!