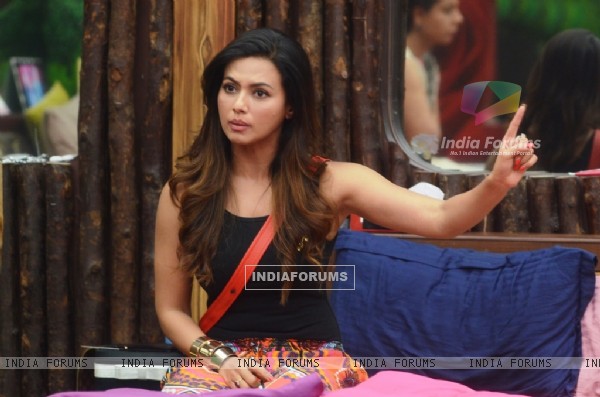 Actress Sanaa Khan who seen as a contestant in Bigg Boss season 6 on Colors made a come back on Bigg Boss 8 as the challenger and as a part of Bigg Boss - Halla Bol team. She was a very fun loving contestant in the house. However, she was not indulged into any major fight in the show.

In the sixth season, she was a very strong contestant and survived in the house for a very long time. But this time she was unfortunate as she is the first contestant to get eliminated from Bigg Boss - Halla Bol.

Sana wanted to be the part of Champion's team and in the tabadla task she was seen unhappy with the decision of sending Sambhavna Seth and Mahek Chahal in Champion's team because she was eager to be a part of champion's team. Her wish got fulfilled in the last episode in the third tabadla she was sent in the other team. But now she will have to say goodbye to Bigg Boss house because out of the nominated contestants Rahul Mahajan, Sambhavna Seth and Sanaa Khan, Sana got the least votes from the audience.

Sana shared a good relation with almost everyone in the house specially with Gautam Gulati and Sambhavna Seth. She indulged into a tussle with Mahek Chahal as she felt that she was playing dirty games to survive in the house.

TellyBuzz wishes Sana Khan all the best for the future.

6 years ago Good Riddance! Nobody outside and Ms Nobody inside the house :)

6 years ago she is so fool actuali ... in this season #Tanna desrv the title just :)

6 years ago pritam rocks in bb8!! want pritam to win!!

+ 3
6 years ago I am unable to understand one thing, who is voting for Sambhavna Seth?

Gautam Gulati is the BEST

6 years ago IF , you tagged the wrong sana :P

Gautam is the best :)