If not then, here is your chance to see her on small screen. After leaving a mark in Bollywood as a child artist Sana Saeed is all set to take a further step in her career. She will now be seen playing a role in Sony Entertainment television’s new serial, Ratna's Sinha's “Babul Ka Aangann Chootey Na”. Sana reveals about her new role in an exclusive interview with our Telly Buzz reporter. 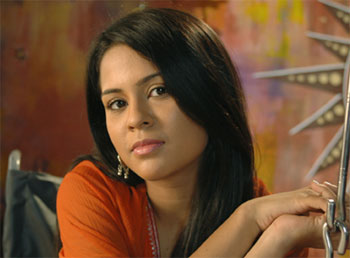 Featured Video
Sana will play the role of the protagonist Aastha’s younger sister. What kind of a role is it? “I play the role of the youngest sister of the family who is physically challenged and confined to a wheel chair. I will be very supportive to Aastha. I can’t reveal more on my character right now”, says the charming new face of Television. Everyone started recognizing you after Kuch Kuch Hota hai. How has life treated you after that? “Life after KKHH has been very good. I did a couple of shows and ads but I had to drop everything after some time because I wanted to concentrate on my studies”.

So, why then did you take up this role? “The production team has been very kind to me. They have agreed to schedule my shoots in such a way so they don't coincide with my class timings. Moreover my role is for a short period of time and hence I took up the role", says Sana. What are your future plans? “Haven’t really decided if I want to stick to acting or take up advertising. Will finish with my studies first and then decide”.

Sana’s naughty and lively character of Anjali was appreciated by all. Will she get the same appreciation through this serial? The Telly Buzz team wishes this gorgeous girl the very best of luck...

kewl_teen 13 years ago Sana do you now you are doing excellent role of Pooja in
LO HO GAYI POOJA IS GHAR KI.You superb actress keep it up!!!!!!!!

+ 7
14 years ago I can't believe that its srk little daughter Anjali, she has been all grown up, and ready to enter telly world. Can't wait to see her in her new and mature role. All the best Sana

+ 4
14 years ago she looks totally different,
wish her all the best!

+ 2
14 years ago OMG She looks sooooooo different...it's been almost 10 years since KKHH, and she looks sooooo diff...absolutely LOVED her in KKHH...I'm glad she's not one of those actors/actresses who quits school for modelling or acting. Best of luck to her in the future!

14 years ago Sure she will come once with SRK on big screen...but cant say it wud as papa n beti or what's

14 years ago Still the same smile....i loved her in KKHH......i hope she comes in atleast once with SRK

+ 5
14 years ago Oh snappp! That girl looks sooooo different! I loved her cute little character in KKHH. Kudos to her for balancing her studies with acting!

+ 5
14 years ago she looks different...cnt believe its her... if i hadnt read this article n saw it on the news, i wouldnt hav eva knwn

14 years ago wow she looks so different but still looks pretty!