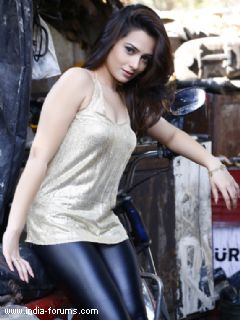 Pretty actress Samiksha Bhatnagar, recently seen in Balaji Telefilms' popular show Kumkum Bhagya on Zee TV, is now focusing on her play these days. Samiksha is doing the play named Rashomon Blues which is coming back again after a gap of sometime.

Rashomon Blues is an adaption of a Japanese play and Samiksha will be seen playing a journalist in the play. Further, she is keen on doing good roles after she opting out from the show Kumkum Bhagya. Earlier also Samiksha did Rashomon Blues where she played a social worker and as the play is back again, she will be seen playing a journalist this time.

Talking about the play, Samiksha told us, "I am playing a journalist in the play who is curious to know the truth behind a murder mystery. We went to Latur for the play and to our surprise, there a stage like setup instead of a theater where we had to scream loudly due to high noise levels. The reaction of the audience was very different when compared to the theater audience but we enjoyed a lot. The most funny part was when one of the key English narrator has to change her English dialect to Hindi in order to engage the specific audience which eventually turned out to be funny."

Samiksha who recently opted out from Kumkum Bhagya is currently looking out for some new projects. She adds, "I am enjoying doing television as well as plays too because both are uniquely different mediums of entertainment and have its own audience. I am focusing on plays these days too along with that, I am in discussion for few projects. I can't reveal much details at this stage. These days, I am learning film making which is at a very initial stage now. I am keen to play more challenging roles in future, where in TV or films."

Naina Singh: Reality shows give you good fame, but it is very ...

+ 2
6 years ago she was playing Akash babhi? she looked really pretty too! wonder why they replaced her?
kumkum bhagya Rocks!!

6 years ago Who did she play in Kb?was she akash's elder bros wife ??