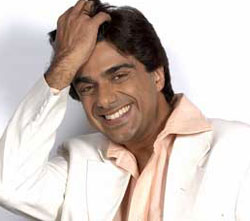 According to our source, "The show is a romantic comedy based in a rural area. And the big news is that Sameer Soni who wooed all his female fans as the dashing Purab in Jassi Jaisi Koi Nahi years back, is tipped to play the main lead in the show".

We called up Sameer who confirms that he is all geared up to stage a comeback to television. "Four years has been a decent break from television. After Jassi, I had been working on films. But it's time to get back to television. Yes, I have been approached to play the main lead in COLORS and Balaji show, Bade Acche Lagte Hai. The channel and production house are eager to work with me. Talks are surely on, but let's wait and see whether this show materializes or there is something else in store for me".

"For the female lead, hunt is on for a simple looking girl like Laali, the protagonist of Zee's Agle Janam Mohe Bitiya Hi Kijo. Earlier, the show was to be based on a Punjabi family, but the script has recently undergone a change and the focus will be on a Marwari family", adds our source.

Our source further informs, "Gracy Singh who made her debut in television with Amaanat before getting into the limelight with her success in Lagaan has also been approached to play the main lead. But nothing on this has been confirmed yet".

The Creative Director of the show is Sandiip Sikcand.

The show will be a daily and is expected to launch in September.

Prity_ruchi 8 years ago where the hell this serial is airing..think it was a fake news.

Monu-SunNaa 11 years ago I was a big fan of Jassi's Purab once upon a time..lolz :) Sameer is a very good actor..hope to see him back on telly ..balaji's recent new shows are doing good anyways...am sure Colors and Balaji will create magic =hit:)

Bul3 11 years ago gud news but dont want gracy opposite him...

Mazzy101 12 years ago thnx!! im sure hes a good actr aswell!! even though i love both Harmaan and Imran!! i want to c hw he does!!

Jiah Khan’s sister accuses Sajid Khan: 'He asked her to take off ...

Nia Sharma and Shivin Narang make for a great on screen pair in ...

Paresh Pahuja on his character Raghu in Tandav: He is a very ...

Saif Ali Khan on embracing parenthood again at 50: Happy to ...