As the common notion goes, 'Bitching and gossiping are essential ingredients of anything that involves women'. Then how can Imagine TV's reality show Desi Girl which involves 7 women show something different?. 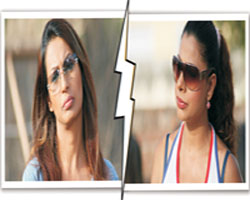 Kashmera Shah and Sambhavna Seth who are known to be reality queens in their own way, are the latest to get into a mess in the reality show.

A source informed us that, "The spark rose when host Rohit Roy announced that the girls will have to swap their houses as well as partners. Fearing their game plans going for a toss, some girls were unhappy with the change but after much persuasion, while all the girls agreed for the swapping Sambhavna remained stubborn and that is when Kashmera stepped in and the entire drama begun."

When contacted, Kashmera Shah in a very strong voice replied, "Bitching and fights are a common sight in the show, but this week she just crossed her limits. Firstly when we were asked to change our families and partner she got insecure about leaving Monica Bedi. Then secondly she created a negative impression about Ishitta in front of her family, who was supposed to replace her in the house. I couldn't control my anger when she said, she didn't feel sorry for her actions and threatened us that she would walk out of the show."

"Then I called her a 'paper tiger' because she doesn't have the guts to quit the show. I was speaking for Ishita and other co-participants, while Monica refused from commenting on the entire event. As the argument got hotter Sambhavna started using abusive language creating a negative impression for herself in the eyes of the villagers", added Kashmera.

When inquired about her retaliation to the abusive language used she said, "I believe in respecting a woman and I never use abusive language for women. So I just kept quiet and even after all this, nothing got sorted out between us. But when Sambhavna was forced by the show organizers, she had to act according to the format and went with Aushima and Monica went with Anmol."

So look out for all the high point quarrel in tonight's episode in Desi Girl on Imagine!

Adil112 10 years ago i dont like kash or sabavana but sambhavna is soo annoying want everthing her way thinking she best at everything. i loved the way kashmeera stood up for ishita what sambhavana did was not right hate sambhavna

Vaibhav.sharma 10 years ago Sambhavana is Rakhi No. 2..but now after seeing Rakhi in ZND...I think that even Rakhi is much better than Sambhavana...actually Rakhi has changed now, I think that..but this Sambhavana is one mad girl and thinks that she is the best...in reality she is nothing ..

jaibaniwalia 10 years ago When the show was starting...I thought I would hate kash but after seeing sambhavna's behavior and everything I think I seriously hate her

desicrowd 10 years ago Can't believe I can tolerate Kash in comparison to Sambhy bhais.

samreen30 10 years ago this show is going to be interesting now!

perfectlyflawed 10 years ago When Sambhavna n Kashmeera is thr its bound to happen... n pls sumone make these both ladies understand tht they r no big deal .. both think too much of themselves